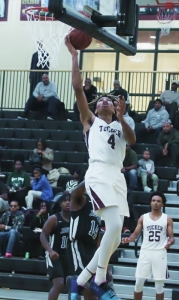 Tucker’s Jomontae Hill gets inside for a layup against Stephenson in the No. 8 Tigers’ 88-45 win on Tuesday. (Photo by Mark Brock)

Tucker and Stephenson jumped right into Region 4-6A action in the first week of the high school basketball season earning a split at Tucker on Tuesday night.

The No. 8 Tucker Tigers defended the home floor rolling to an 88-45 region victory over the Jaguars to start the season 2-0 overall and 1-0 in 4-6A play.

Stephenson’s Justin Harris opened the game with a three-pointer for a quick 3-0 Jaguars’ lead, but Tucker’s Nick Watson and Braylon Seals answered with back-to-back threes of their own and the Tigers never trailed again.

Jomontae Hill scored seven points in the first quarter on the way to 15 in the first half and Nate Ogbu got an offensive put back at the buzzer for a 22-9 advantage for the Tigers heading into the second quarter.

Hill and Ogbu opened the second quarter alternating hitting two free throws as the pair combined to hit eight in a row. David Giddens added two more free throws and a basket from Raylon Barrion’s steal and assist as Tucker put together a 12-3 run to open the lead to 34-12 with 4:44 left in the half.

Barrion added a three-pointer and a drive for two to go with Watson’s third three of the game as the lead increased to 25 (44-19) with 2:26 left in the half.

A three-pointer by Dylan Pritchett with three seconds left in the second quarter sent the Tigers into the half up 50-26.

A pair of rim rattling dunks by Hill and another by Ogbu as Seals played the ball off the backboard for the assist sent the Tigers into the final quarter leading 74-36.

Hill led four Tigers in double figures with 25 points on the night while Ogbu added 16 points and 8 rebounds, Watson 15 points all on three-pointers and Barrion chipped in 12. The Tigers also scored over 80 points in their season opener as they defeated Creekside 89-52. 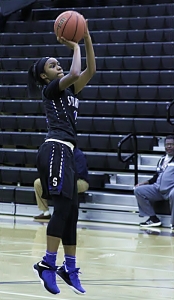 Stephenson’s Kassidy Broussard shoots a jumper on the way to 18 points to lead the Lady Jaguars to a 65-30 Region 4-6A win. (Photo by Mark Brock)

(G) Stephenson 65, Tucker 30
The No. 8 ranked Stephenson Lady Jaguars bounced back from a 12-point loss to Class 7A No. 3 ranked Westlake last weekend to knock off the No. 6 ranked Tucker Lady Tigers 65-30 in both teams’ Region 4-6A opener on Tuesday night at Tucker.

Kassidy Broussard hit for seven first quarter points and four other Lady Jaguars (1-1, 1-0) joined in the first quarter scoring as Stephenson jumped out to a 15-2 lead heading into the second period of play.

Stephenson’s balanced scoring attack continued in the second quarter as seven different Lady Jaguars scored in the period. Tucker got its first basket of the game on a drive by Kaelyn Edwards with 6:50 left in the half.

Tucker hit five of six free throws in the final 2:21 of the first half to trim the lead to 32-12 at the break. Deja Humphries and Erica Park both hit two of the five free throws made before the half.

Edwards hit one of two free throws to open the second half and Stephenson responded with a 12-0 run led by Sierra Wynn who had a pair of offensive put backs and two free throws in the run.

The lead was 46-20 heading into the fourth quarter as Edwards knocked down a three-pointer for Tucker at the buzzer.

Wynn (4 points) and Broussard (5 points) added to the lead by combing for a 9-2 run to start the fourth quarter for Stephenson which was up 55-22 with 5:09 to play and cruised to the win.

Broussard led all scorers with 18 points for Stephenson and Tucker’s Edwards finished with 10 points while teammate Deja Humphries added 7 points and 8 rebounds.