Chamblee Fall in Elite 8 to No. 1 ranked McIntosh 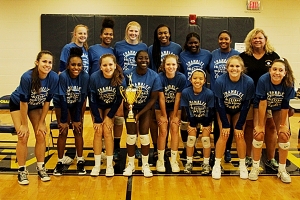 The Region 5-5A champions Chamblee Lady Bulldogs reached the Class 5A Elite Eight for the third consecutive season and set a school second best record of 41-7. (Photo by Mark Brock)

The No. 2 ranked Chamblee Lady Bulldogs dropped a hard fought 3-0 decision to No. 1 ranked McIntosh on the road in the Class 5A state volleyball playoffs Elite Eight.

McIntosh held off the Lady Bulldogs 25-19, 25-18, 25-15 to earn a trip to the Final Four on the way to being the 2018 Class 5A champion. It was third consecutive season for Chamblee to fall to McIntosh in the quarterfinal round of the state playoffs.

Jade Watson had 14 kills and Erin Carpenter had 25 assists to lead the way for the Lady Bulldogs who finish the season at 41-7.

It is the second most wins in program history behind the 2005 club’s 56-8 mark and Final Four appearance.

Junior Becca Evans was named Class 5A First Team All-State and Camille Vanleer was named to the Class 5A All-State Honorable Mention.