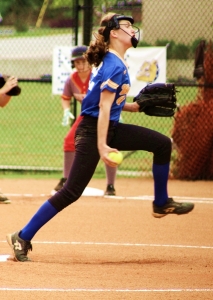 Chamblee’s Margaret Axelson picked up two wins in the first round of the Class 5A state playoffs. (Photo by Mark Brock)

The Chamblee Lady Bulldogs are the lone remaining DeKalb County softball team as the state playoffs move into the second round (Sweet 16) this week.

The Lady Bulldogs advance to the Sweet 16 for the second consecutive season with a convincing sweep of Clarke Central by scores of 10-0 and 17-4.

Villa Rica is coming off a sweep of Region 6 No. 2 seed Riverwood by scores of 9-0 and 13-0 to advance to the Sweet 16. Chamblee defeated Riverwood 7-2 and 15-1 during the regular season.

Chamblee lost a tough 3-2 decision to Villa Riva’s Region 7 rival Lithia Springs while Villa Rica took wins of 10-6 and 4-3 during the regular season.

Lithia Springs was Chamblee’s first ever playoff win a year ago and first playoff series win during the first round in program history. Coach Alan Loper’s Lady Bulldogs look to make more history this week as they try to advance to the Elite 8 (third round) for the first time in program history.

Results from Friday State Playoffs
Four DeKalb teams went into Friday with hopes of extending their seasons into the Sweet 16 only to have them ended by their playoff opponents.

Martin Luther King Jr. made just its second state playoff appearance in program history and the first since 2004 (Class 3A, loss to Harris Co.) by hosting Northside of Warner Robins. Northside swept the first round Class 5A series 23-2 and 15-0 to eliminate the Lady Lions.

Arabia Mountain which had advanced to the Class 5A Sweet 16 the past two seasons saw its 2018 team fall in a first round sweep to Walnut Grove in their fifth consecutive playoff appearance. Walnut Grove won the first game 12-0 on Tuesday, but rain washed out the second game. The second game was moved to Friday with Walnut Grove taking a 14-2 win for the series victory.

Southwest DeKalb earned their sixth consecutive trip to the state playoffs and travelled to Buford for their Class 5A first round series. Buford knocked out the Lady Panthers 15-3 and 15-0 to sweep the series. Southwest falls to 0-12 in the playoffs.

Cedar Grove reached the state playoffs for the fifth season in a row with a trip to Jefferson for a Class 3A first round clash. Jefferson swept the two games 12-0 and 15-0 to knock Cedar Grove out the playoffs.