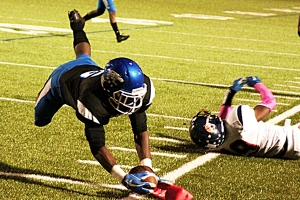 Stephenson’s Ryan Ingram dives to the pylon for a touchdown against Mundy’s Mill. (Photo by Mark Brock)

Running back Ryan Ingram scored two touchdowns to lead the No. 10 ranked Stephenson Jaguars into a tie with DeKalb rivals No. 5 ranked Tucker Tigers with a convincing 38-3 win over the Mundy’s Mill Tigers on homecoming Friday night at Hallford Stadium.

Ingram’s first score came on a swing pass from quarterback Joseph Jackson that went for thirteen yards as Ingram shook a tackler at the four-yard line and dove to the pylon for the touchdown with 4:45 left in the first half. Dominic Allen hit the extra point to make it 7-0 and complete an 11-play, 75-yard drive.

The Jaguars, (6-1, 5-0), went to Jevon Goff on its next scoring drive as Goff ran for 40 yards in the 48-yard scoring drive. Goff went the final 16 yards around the right side beating defenders to the corner of the end zone for the touchdown. Allen was good again on the PAT for a 17-0 Jaguars’ lead.

Mundy’s Mill got onto the scoreboard with 54 seconds to play in the first half as Javion Jackson set up a field goal with his 52-yard kickoff return to the Jaguars’ 38 following Stephenson’s touchdown.

Stephenson forced a fourth and five at their 17 and Mundy’s Mill went to kicker Luis Rivas who hit a 34-yarder to make it a 17-3 score with just 54 seconds to play. 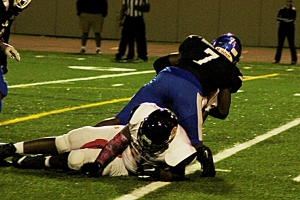 The Jaguars needed just one play following the kickoff as Donovan Moorer followed blocker Covenant Dugbor around the right end and raced 67 yards into the end zone with 33 seconds remaining in the first half. Allen’s kick made it 24-3 heading into the half.

Stephenson opened the second half with a touchdown drive capped by Ingram’s second touchdown of the game, this one a five-yard run, to up the lead to 31-3 with 8:00 left in the third quarter. Allen converted his fourth PAT.

Jackson capped the night for Stephenson by hitting Deshon Stoudemire on an 11-yard scoring toss with 1:49 left in the third quarter. A fifth PAT by Allen made the final of 38-3.

Stephenson and Tucker are now both 5-0 and tied atop the Region 4-6A standings with a head-to-head matchup looming on the final week of the regular season (Nov. 2) at Hallford Stadium.

Haselwood opened the scoring with the first of Smith’s two touchdown passes as he went up between a pair of Westminster defenders in the end zone for a 12-yard touchdown. He then returned a punt 70 yards as the Saints (7-1, 4-0) led 14-0.

Westminster managed a Charlie Ham field goal in the first half to make it a 14-3 Cedar Grove advantage at the break.

The Saints picked up another score as Smith connected with Rashad Jordan for a 13-yard touchdown pass and then got a safety by the defense to extend the lead to 23-3.

Robert Jones finished out the scoring with a 13-yard touchdown run for the final of 30-3.

Cedar Grove takes this week off before traveling to second place Pace Academy with clinching their second consecutive Region 5-3A title in reach.

The Panthers held Miller Grove to just 141 yards of total offense (69 rushing, 72 passing) to improve to 7-0 overall on the season and 2-0 in region play.

Jamel Starks had a rushing touchdown and Rion White connected with Aquil Muhammad for a touchdown pass to account for the two Panthers’ scores.

The win also brought a 14-game Region 5-3A losing streak to an end.