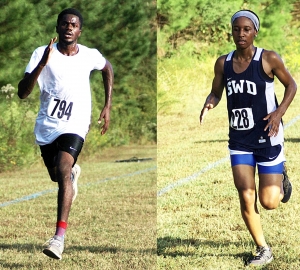 The Lady Panthers place six runners in the Top 10 to outduel Arabia Mountain 15-45 for the girls’ victory in the day’s opener.

The Panthers and Cedar Grove both scored 49 points in the boys’ race with Southwest DeKalb edging the Saints for first as the sixth runner for the Panthers, Jalon Kimborough (25:20.80) in 16th, came in ahead of Cedar Grove’s sixth place finisher Jaylen Elder (27:11.50) in 21st.

Southwest DeKalb’s first finisher was Emmanuel Smith (22:50.70) in fourth and teammate Calvin Mosley (22:58.40) was right behind in fifth. 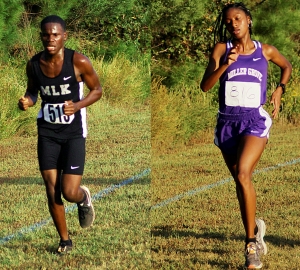 SECOND RACE
Martin Luther King Jr. and Tucker swapped first and second in the final race of the day with the Lady Lions winning the girls’ race 25-33 over Tucker and the Tigers winning the boys’ run 28-41 over the Lions.

Miller Grove track state champion Emoni Coleman ran her first cross country race of the season and grabbed top honors in the girls’ race with an Arabia Mountain best time of the season at 24:15.70.

Tucker’s Andrew Todd (21:18.50) finished just outside the Top 10 in 12th to clinch the boys’ win by the Tigers which had four runners in the Top 10 along with the Lions.

The DCSD Junior Varsity County Championships are scheduled for today (Thursday, Sept. 27) at the Druid Hills Middle School course with the girls’ starting at 5:15 pm and the guys at 5:45 pm.

The DCSD Varsity County Championships are set for Tuesday, Oct. 2 at the Druid Hills Middle School course with start times of 5:15 pm (girls) and 5:55 pm (boys).

See complete results at link below: