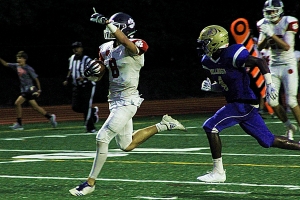 Dunwoody’s Thomas Neville (8) scored a pair of touchdowns to lead the Wildcats to a 23-7 Golden Spike rivalry game win over the Chamblee Bulldogs. Neville scores here before Chamblee’s Sydney Murray (4) can catch him. (Photo by Mark Brock)

Thomas Neville scored a pair of touchdowns to lead the Dunwoody Wildcats to a 23-7 win over the Chamblee Bulldogs for a fifth consecutive win in the Golden Spike rivalry at North DeKalb Stadium on Friday night.

The Bulldogs (0-3), who have never taken home the Golden Spike since its inception in 2014, jumped out to an early 7-0 lead with 5:23 to play in the first quarter on a one-yard run by Brayson Seaborne. Seaborne’s touchdown finished off a 41-yard drive kept alive twice on big third runs of 17 and 14 yards by Renaldo Whitman.

It took the Wildcats (1-1) almost 9 minutes to respond to the score as Bradley Fields finished off a 42-yard drive for Dunwoody with a one-yard touchdown run of his own with 8:47 left in the first half. Robby Hardin had runs of 12 and 15 yards in the drive before being injured. Ben McGee added the tying point after kick.

Dunwoody took a 14-7 lead into half behind the first of two Neville touchdown runs with 3:51 left in the second quarter. Neville went up the middle and cut right on the way to a 23-yard scamper into the end zone. McGee was good again on the PAT for the 14-0 lead.

Chamblee had a rough start to the third quarter starting drives inside their own 20 three different times, including a fumble recovered by Dunwoody’s Isaac Anderson at the Chamblee 17. 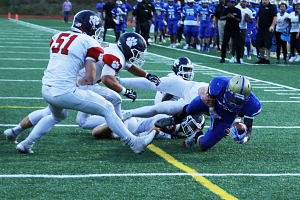 Chamblee’s Darius Williams (with ball) uses second effort to get down to the one to set up the Bulldogs’ only score of the game. (Photo by Mark Brock)

The Bulldog defense which had 11 tackles for a loss in the game came up big with a pair of losses totaling 12 yards to force Dunwoody to punt.

Following an exchange of punts Chamblee found itself at its own two on a nice punt by Dunwoody’s Will Forth that was downed inside the five.

Two plays later Daniel Claytor broke through the Chamblee offensive line for a tackle in the end zone to collect a safety for the Wildcats to extend the lead to 16-0 with 5:03 left in the third quarter.

Dunwoody got the ball just before the end of third quarter at its own 30-yard line and began marching downfield as the fourth quarter got underway. Facing a third and three at the Chamblee 30 Neville broke loose on a 27-yard run to the Bulldog three to set up his second touchdown of the game. He went the final three yards on the next play and McGee tacked on the point after for the final margin of 23-7 with 9:03 to play.

The Wildcats now lead the Golden Spike series 5-0 and the overall series with Chamblee 12-9.

Bryson Williams accounted for a pair of touchdowns in the game to lead the Rams (2-1) to the win. Williams ran 10-yards for one score and tossed a 9-yard pass to Matthew Crawford for another.

Amir Muhammad opened the scoring in the game for the Rams with a three-yard run to give Arabia Mountain all the points it would need.

The Rams now lead the series with their rival 3-2 as the Lions fall to 0-2 on the season.

Lithonia 43, Stone Mountain 6
The Lithonia Bulldogs ran their record to 3-0 on the season with a 43-6 win over the Stone Mountain Pirates on Friday night at Adams Stadium.

The Bulldogs jumped out to a 14-0 lead in the first quarter and cruised to the win over the Pirates (0-3) in the 40th meeting of the two rivals and first meeting since 2015. Lithonia leads the series 25-14-1 having won the last two contests.

The Panthers joined Lithonia, McNair and Cedar Grove as the DeKalb teams with unblemished records heading into the fourth week of the season.

Cedar Grove 45, Columbia 0
The nationally ranked Cedar Grove Saints continued to roll and protect their national ranking with a 45-0 victory over the Columbia Eagles.

Cedar Grove jumped out to an early 21 lead and eased to the win over the Eagles (1-2).

The Saints (3-0) travel to Class 7A McEachern for another big test on the season on Friday night.

McNair 15, Redan 13
The McNair Mustangs improve to 2-0 on the season with a nail-biting 15-13 win over the Redan Raiders at Godfrey Stadium last Friday night.

Redan got out to a 6-0 lead early before the Mustangs rallied to take a 7-6 lead at the half.

Tucker 55, Forest Park 15
The Tucker Tigers picked up their first win of the season rolling past Forest Park 55-15 on the road.