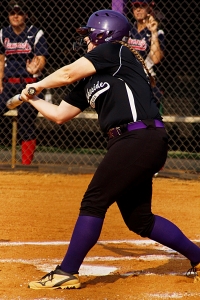 Lakeside’s Mack Blair had a three-run homer and three hit day to lead the Lady Vikings in a 15-0 Region 7-7A win over Berkmar. (Photo by Mark Brock)

The Lakeside Lady Vikings scored five runs in the bottom of the first inning and rolled to a 15-0 Region 7-7A victory over Berkmar recently.

Brady Miccichi’s RBI single to plate teammate Reagan Greene got the offense rolling at 1-0. A couple of batters later Mack Blair stepped to the plate and crushed her first homerun of the season, a three-run blast over the center field fence, to make 4-0.

Kelsi Diggs had a pair of hits to lead Berkmar and Brooke Findley took the loss giving up all 15 runs in the game.