The Chamblee Lady Bulldogs improved to 12-0 with six consecutive wins on the way to the title of the Arcadia Invitational at North Forsyth last weekend.

Chamblee is off to a hot start early in the 2018 high school girls’ volleyball season at 12-0 following their championship at the Arcadia Invitational Tournament hosted by North Forsyth this past weekend.

The tournament victory is the second of the season for Class 5A No. 5 ranked Chamblee which won the DCSD Spikefest to open the year at 4-0.

A 25-19, 25-21 sweep of Northgate (6-5) in the semifinals sent Chamblee into the championship match against Creekview.

Creekview got out to an early lead in the first set of the championship match, but the Lady Bulldogs pulled it together to pull out a 25-20 win to take a 1-0 lead in the match.

The second set was similar to the first with Creekview (5-4) jumping out quickly. Chamblee again rallied to take a 16-11 halfway through the set.

A 9-3 run to end the set clinched a 25-14 win and the championship trophy for the Lady Bulldogs. Spikefest MVP Becca Evans contributed 12 digs, 5 kills and 2 aces in the win. Erin Carpenter had 17 assists to go with 8 digs by Kennedy Preval, 6 kills by Hannah Cain and 3 blocks by Camille Van Leer. 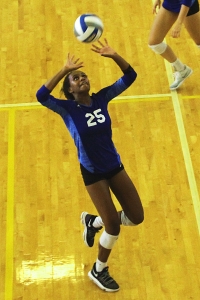 Chamblee’s Erin Carpenter had 98 assists during the Arcadia Invitational.

Evans finished the tournament with 17 aces, 38 kills and 48 digs to lead the Lady Bulldogs attack. Jade Watson contributed 5 aces 20 kills and 27 digs. Erin Carpenter was an assist machine with 98 during the tournament, Kennedy Preval had 65 digs, Hannah Cain 19 kills and Camille Van Leer had 14 kills and 21 blocks.

Chamblee takes on another Class 7A opponent today (Tuesday) as the Lady Bulldogs travel to North Gwinnett for matches against North Gwinnett (3-2) and a rematch with West Forsyth.

In between tournament wins Chamblee won regular season matches against Forest Park and Drew Charter both by 2-0 scores.