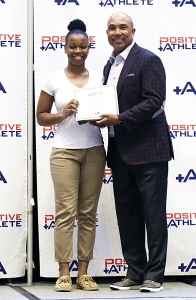 The Positive Athlete Foundation of Georgia recently recognized 11 DeKalb County student-athletes and two coaches for their positive approach to athletics and academics.

Former Super Bowl MVP Hines Ward founded Positive Athlete to recognize student athletes for more than their athletic achievements. Those nominated for the awards each year can have one or all three attributes including having overcome difficult circumstances in life, given back to their communities and schools and/or an infectious positive attitude.

Martin Luther King Jr. senior girls’ basketball player Azhana Maxwell was one of the 11 to receive honors out of the Atlanta/DeKalb County Region and also picked up a state award.

This amazing student athlete maintained a 3.5 GPA since entering M.L. King being a leader on and off the court as the team put together an overall GPA of 3.4. She accomplished all this while also helping raise her siblings since the death of her mother. Hours working with them on their homework and picking them up from their extra-curricular activities when their father was working. This meant leaving practice early and rushing back to finish up all with a smile on her face.

Maxwell never played for a team with a winning record and her one playoff game came this year in a first round loss to Greenbrier. Despite the odds she continued to give it her maximum effort nightly as her team had just 28 wins in four seasons. She also earned a full scholarship to Savannah State through her hard work.

Regional Winners
The other 10 regional winners represent a variety of sports as leaders, community volunteers and student-athletes that have overcome the odds or give back to those who need their help.

These DeKalb athletes are serving as mentors and role models for those following in their footsteps across the DeKalb County School District.

There are also two coaches who were recognized regionally as well for their dedication and giving to their schools and community.

LaTia Bell, SW DeKalb
Senior LaTia Bell of Southwest DeKalb, has battle Sickle Cell Anemia since her childhood and despite extended period away from school and her high school tennis she graduated from high school in May with a 3.80 GPA.

Bell teamed with fellow girls’ tennis partner Kendall Davis to go 6-5 at No. 1 doubles as the Lady Panthers reached the Class 5A state playoffs. She fought through her illness to earn an academic scholarship to the University of Georgia. During her time away from her team she kept in contact encouraging them and wishing them luck in the matches she missed.

Aye Min Thu, Clarkston
Clarkston’s Aye Min Thu participated in cross country, wrestling and track this year at Clarkston while maintaining a 3.8 GPA and being a role model for the students at Clarkston High School.

He was part of the Angora’s third place finish at the Class 5A State Cross Country Meet and a state sectional qualifier in the 106 pound weight class in wrestling.

She volunteers in her community at DeKalb Plus Pals as a mentor for students and at MedShare International (part of Hands on Atlanta) where she helps recover and redistribute surplus medical supplies to many developing countries such as Ethiopia, Nigeria, Guatemala, Haiti and the Philippines.

A dual enrollment student at Georgia Piedmont Technical College she has a combined 3.17 GPA and is moving forward with her dream of becoming a Registered Dental Hygienist.

Yolian Zerom, Druid Hills
Rising senior Yolian Zerom of Druid Hills is a proud Red Devil boys’ soccer player that excels as part of the soccer program as an athlete, student and a community volunteer.

Zerom is one of the top students in his class with a 4.0 GPA, an officer in the Student Government Association and the Junior Class, Beta Club and the DeKalb Youth Symphony Orchestra. He also volunteers as an intern at the nonprofit organization Friends of Refugees.

As a first generation American of immigrant parents from Eritrea he saw the important roll the organization played in the life of his parents and others who were transitioning into a new country and culture. He answered the call to serve and hopes to help mankind in the future by becoming a research scientist in infectious diseases, virology, biochemical engineering or as a marine biotechnical engineer.

B’Leaka Martins, Towers
Another Positive Athlete comes from Towers High School in the form of girls’ soccer player B’Leaka Martins who is known as a talented, helpful and confident student at her school.

She is one of the co-founders of “Clash of the Cultures” social club as well as many of the student body clubs at Towers. She also shows off her talented vocal skills by often singing the school’s alma mater over the school’s public address system to start the day.

Jack Fiscella, Dunwoody
Heading to the University of Tennessee this fall Dunwoody senior jack Fiscella is a loved and respected member of the student body.

A former Dunwoody lacrosse player the senior had to forego his final season due to multiple concussions which forced the vocal team leader and captain out of the game. His love of the sport did not deter him and he realized he could still be an active leader and player developer. He has a passionate focus on coaching and never lost his sense of optimism while serving as a role model for his peers.

Gabrielle Williams, Tucker
Serving as team captain in both cross country and track and field at Tucker High School Gabrielle Williams has proved to be an amazing student and athlete who has overcome and continues to overcome life obstacles.

Williams lost her father to health related issues at a young age and has worked hard to be a great asset to her mother as they moved forward following such a great loss in their lives. She worked hard in the classroom and at being a reliable teammate and asset to both the athletic programs she has participated in during high school.

Her goal is to earn her degree in physical therapy as she attends Paine College on a track scholarship.

Hannah Ray, Lakeside
Rising Lakeside senior Hannah Ray is an inspiration to her Lady Vikings’ soccer team, coaches and other students at the school after being diagnosed with cancer last fall.

She has been a part of the Lady Vikings’ junior varsity program for three years and despite her battles with chemotherapy and surgeries she has proudly fought on with a positive attitude that has been inspiring to other athletes trying to push through workouts and injuries.

Ray planes on continuing on being a part of the program as a manager and inspiration this coming school year.

Marshal Peters, Chamblee
Selected as an Alternative Athlete Chamblee’s Marshall Peters is known as one of the most caring and popular athletes in his high school.

The 6-2, 260 pound athlete provides a glowing example to his teammates and others while participating in the swimming and baseball programs at Chamblee High. Be it serving as an anchor on the relay, performing a double flip while coming off the diving board or playing first base on the diamond and being asked to steal following a base hit, Peters inspires other by his willingness to get out there and give it his best.

His gift of gab has landed him a role as the PA announcer for the volleyball and softball teams at Chamblee. He takes all AP courses in school and serves as Secretary of the Student Government Association. He works with preschoolers at his church, is an active member in the YMCA Leaders Club coaching and refereeing and spending his summers teaching and coaching swimming. He was also voted Homecoming King this past year by his peers.

Isaiah Ratcliff, Cedar Grove
Football and track athlete Isaiah Ratcliff of Cedar Grove was named a Positive Athlete Multi-sport selection as an All-State and All-Region player for the Saints.

Ratcliff battled the loss of his mother in the fifth grade but continued to strive to do well both academically and athletically. He has continued to push himself through every negative situation including the loss of a close aunt as a freshman. He has a 2.7 GPA and has several athletic scholarship offers.

Two DeKalb coaches were also recognized as Regional Positive Athlete Award winners for their work coaching their sport, teaching and work in their communities.

He quietly works hard for his students, athletes and community in a year-round mode during the football season and beyond raising money for needed school equipment, facility upgrades, off-season fitness programs, camps and volunteering at a local nursing home and throughout the community.

Nash instills a philosophy of “family” to bind the athletes while building character and leadership in the young men and students he leads. The athletes can earn FAMILY t-shirts and wear them with pride in their school and community.

Working with the Developmentally Disabled students at Stone Mountain High School she finds ways to engage students while providing a rigorous academic curriculum for her students. She also serves as a DeKalb County School District Teacher Support Specialist working with new teachers as a mentor to lead them as they grow.

She has also proven to be a great motivator as the girls’ track and field coach through her positive attitude and enthusiasm for the sport. She had athletes advance to the Class 3A State Meet this past season.