The Tigers went undefeated in football at 9-0 to claim the Region 1 and county championships (22 points). The Tigers took that title and doubled up by winning the boys’ track championship (24 points) to account for over half of the 87 points.

Tucker also won the Region 1 boys’ basketball title to aid the cause. Tucker collected just its third Top five finish and first overall title with its 2018 performance. The program had finished third in both 2014 and 2015 which was its previous high mark in the standings.

Tucker became just the sixth different school to win the award in the 11 years. Chapel Hill (3) is followed by Cedar Grove, Miller Grove and Stephenson with two wins each with Champion and Tucker claiming one apiece.

Chapel Hill which narrowly won its county leading third All-Sports Award 92-91 over Chamblee a year ago came up three points shy of a fourth title. 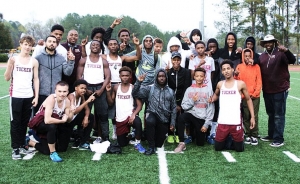 Stephenson won Region 2 titles in football (11 points) and boys’ basketball (20 points) while coming in second in girls’ basketball (21 points). Stephenson leads the county in Top 5 finishes with 10 with only the 2011 season finish not in the Top 5.

Lithonia picked up its second Top 5 finish since 2014 coming in fourth with 70 points. Lithonia won the Region 3 titles in football (11 points) and boys’ basketball (16 points) and took second in the county in the girls’ track championship (19 points).

Cedar Grove finished fifth for the seventh time with 65.5 points to tie Miller Grove for third in Top 5 finishes. The Saints won the Region 4 title in girls’ and boys’ basketball.

See the All-Sports Award teams standings and history at the links below: