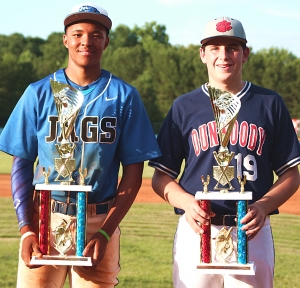 Dunwoody’s Jack Caiaccio struck out a DCSD Junior All-Star Baseball Classic record 10 batters and went 1-4 with a run scored on offense to lead the West Juniors to a thrilling 8-7 win over the East in the 10th annual Junior matchup at Stephenson High School on Tuesday night.

Caiaccio entered in the top of the fourth inning with his West team trailing 2-1 and promptly set down 12 consecutive batters, nine by strikeout as his offensive battery mates tied and then pulled ahead in the game.

Chamblee’s Travis Hammond stroked a two-out, RBI single to center in the bottom of the fourth to knot the game at 2-2.

Neither team scored in the fifth, but the West struck for three runs in the sixth. A throwing error with Matthew Welsh on third allowed the go-ahead run to cross the plate and Columbia’s Dominique Humes and Lakeside’s Gus Young, who had homered in the second inning to deep center field, each drove in runs with singles to make it a 5-2 game heading to the seventh.

Caiaccio got an infield fly and a pair of strikeouts to set the East down in order and Max Stephens of Chamblee had a bases loaded, two-run single to up the lead to 7-2.

The East closed within 7-6 with a four-run burst against Caiaccio in the eighth before he coaxed a fly ball to center for the third out to keep his team in the lead. Tyson Scott of Arabia Mountain stroked a two-run double to go with RBI from Talib McDaniel-Burdeaux of Stephenson and Jordan West of Tucker. 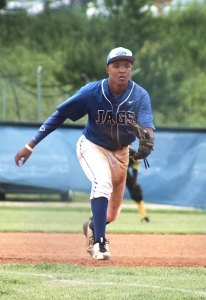 Welsh extended the lead to 8-6 with a two-out, RBI single to score Young who had walked to start the bottom of the eighth.

Decatur’s Tucker Jones climbed on top of the mound in relief of Caiaccio in the top of the ninth. Micah Sanders of Arabia Mountain was hit by a pitch from Jones to put the tying run on base.

Stephenson’s Ga’Von Wray hit a 2-0 offering from Jones into the gap in left center to score Sanders, but was thrown out at third while trying to stretch his double into a triple.

Jones got the next two batters to end the game with the save. 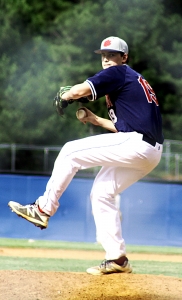 The East scored first as Tucker’s Jordan West walked, stole second and two wild pitches later scored to make it 1-0. Lakeside’s Gus Young hit is bullet over the center field wall to knot the game at 1-1. Wray had an RBI triple in the third to give the East the 2-1 lead that lasted until the sixth inning.

Caiaccio’s pitching performance earned him the West Most Valuable Player award as he allowed no walks, struck out the record 10 batters while giving up 5 hits and four runs in his five innings of work.

The Dunwoody junior also set the record for least walks (0) in the most inning pitched (5) breaking the mark set by Druid Hills’ Harrison Aiken in 2016 (0 in 4 innings), tied Michael Hannah of Lakeside’s record of most innings pitched (5) set in 2016 and the strikeout record (10) breaking the 7 set by Jared McKay of Chamblee in 2013.

Ga’Von Wray earned the East MVP nod after going 2-3 at the plate with a triple (tied with 4 others), double and 2 RBI to go with two innings pitched (started the game) with 5 strikeouts, 1 hit, 1 run and 3 walks.