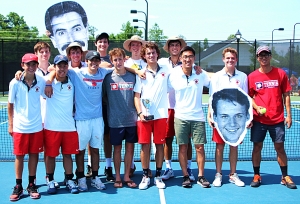 A third match against Region 7-6A foe Johns Creek for the Dunwoody Wildcats was hard fought before the Gladiators grabbed the Class 6A Boys’ State Tennis title 3-0 at the Rome Tennis Center at Berry College on Saturday.

Dunwoody (15-8) was making their sixth appearance in the state title match having won four state titles with the last coming in 1989 and the last championship appearance coming in a loss to Westminster in 2006.

The Wildcats battled valiantly extending games with long points, but having trouble getting the needed wins to prolong the matches.

Matthew Moussouri and Quinn Wicklund won their opening set at No. 1 doubles to get the Wildcats’ fans excited early on in the match. 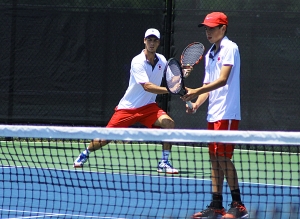 Moussouri and Wicklund (13-4) having a 6-4 win in the opening set had Johns Creek’s Jack and Britt Lee battle back to win the second set 6-3 and force the beginning of the third set.

The loss ended Dunwoody’s five-match win streak dating back to the consolation finals of the Region 7-6A tournament against Centennial.