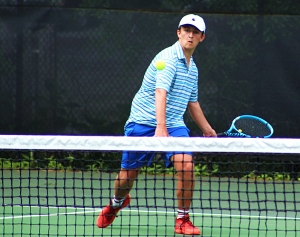 Chamblee’s Allen Howell moves towards the net during his long three-set match at No. 1 singles on Wednesday. (Photo by Mark Brock)

The Chamblee Bulldogs, Dunwoody Wildcats and Tucker Lady Tigers joined the Chamblee Lady Bulldogs in their respective Elite Eight rounds of the state tennis tournaments with victories on Wednesday.

A hard-fought match between Chamblee (15-4) and Woodland-Bartow (11-7) went to the Bulldogs 4-1 in the second round of the Class 5A Boys’ State Tennis Tournament at Chamblee on Wednesday.

The match was tied 1-1 after Woodland’s Blake Bottegal powered his way to a 6-4, 6-1 win over Chamblee’s Chase Starks (10-6). It evened the match following Chamblee’s No. 1 doubles team of Dixon Hall and Carter Difonzo (9-3) rallied from an early 1-2 deficit in the opening set to a 6-2, 6-1 win over Woodland’s Alex Bunta and Hayden Lusk on the back of seven service break games.

The No. 2 doubles team of Jake Busch and Eshaan Agrawal played nearly flawlessly to win 6-1, 6-1 over Woodland’s Max Costlow and Nick Warren to improve to 3-0 overall and placed some pressure on Woodland which trailed in the match at 2-1.

Meanwhile Chamblee’s Sam Lehman (10-2) had quietly won the first set of his No. 3 singles match 6-1 and led the second set 5-1 before Woodland’s Connor Gunnell put together three straight game wins to pull within 5-4. Lehman would serve out to win the set and clinch the match by putting the Bulldogs up 3-1.

Howell went on to defeat VanOrder 6-1 in the third set to make the final margin of 4-1. 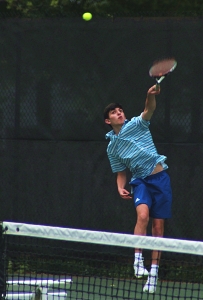 Chamblee’s Jake Busch serves during his No. 2 doubles match with partner Esaan Agawal. The pair won 6-1, 6-1 at No. 2 doubles. (Photo by Mark Brock)

It is the Bulldogs first time to advance to third round of state tournament play since a finals appearance in 1999 which followed their 1998 Class 2A state championship. It also evened Chamblee’s state tournament record at 13-13 all-time. Chamblee will face Region 3 No. 2 seed McIntosh, a 4-0 winner over Bainbridge in the second round, on a date and site to be determined.

Tucker has only reached the girls’ state tournament five times and with the Lady Tigers 3-0 win over Richmond Hill on Wednesday advanced to the quarterfinals for the first time in program history.

Trinyty Turner and Jade Warupa closed out the match with a 6-3, 6-0 decision at No. 2 doubles. Tucker now must take on Region 7 No. 4 seed John’s Creek which defeated Harrison 3-0 in the second round. A date, site and time have yet to be determined.

In other Class 6A action, the Dunwoody Wildcats (13-7) swept Harrison out of the state playoffs with a 3-0 decision in boys’ Sweet 16 play. Dunwoody moves on to face Region 2 champ Glynn Academy, a 5-0 winner over Heritage-Conyers, at a date, site and time to be determined.