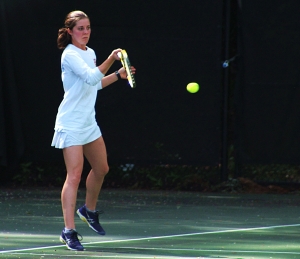 Chamblee’s Madeline Meer makes a return in No. 1 doubles. Meer and teammate Olena Bilukha rallied from down a set for a 2-1 win. (Photo by Mark Brock)

A big rally by the Chamblee Lady Bulldogs No. 1 doubles team of Olena Bilukha and Madeline Meer proved to be the difference maker in a 3-2 victory over Carrollton in the Class 5A girls’ state tennis playoffs on Tuesday at Chamblee.

Bilukha and Meer got off to a slow start against their counterparts Katy Nixon and Caitlann Arant dropping the first set 2-6 to fall behind.

The Bulldog pair, now 8-0 on the season, built a 4-0 lead with a pair of service breaks in the second set only to have the Trojans’ duo rally to knot the set at 5-5.

Bilukha served to give her team a 6-5 lead and then teamed with Meer to break Arant’s serve to claim the 7-5 victory.

Arant and Nixon jumped out to a 2-0 lead to start the third set and appeared to be on a mission to win the match. Bilukha got a win on her service and a break of Arant again tied the match at 2-2.

Meer won her serve and a service break of Nixon gave the Chamblee pair a 4-2 advantage. Bilukha again won her service to put the pressure on Avant who would serve with the match on the line. A service break by the Bulldogs clinched the 2-6, 7-5, 6-2 victory to give Chamblee a 2-0 lead as No. 2 singles player Grace Pietkiewicz won in straight sets (6-0, 6-4) over Carrollton’s Alli Hodges.

Pietkiewicz cruised to the first set 6-0 victory, but Hodges got out to a 3-1 lead in the second set before the Lady Bulldog began to claw her way back into the set. Winning the next three games gave Pietkiewicz a 4-3 lead only to have Hodges hold serve to make it 4-4.

Pietkiewicz (13-1) held her serve and then broke Hodges for the sixth time to clinch the victory.

Madison Trinh won her first set at No. 1 singles against Sonya Ivashchenko 6-2, but was forced to a third set with the No. 3 singles Neena Katauskas taking the court against Audrey Best and the No. 2 doubles of Emilya Ershtein and Lila David battling Christian Avant and Kate Harvey.

Katauskas, a freshman, rolled to a 6-0, 6-0 over Best to clinch the match for Chamblee and improve to 11-1 overall on the season.

The Lakeside Lady Vikings had their season come to an end in the Sweet 16 of the Class 7A state playoffs with a 3-0 road loss to North Gwinnett.