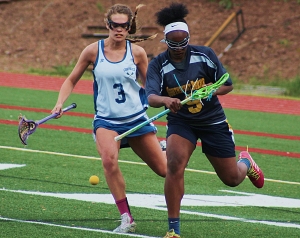 A 10-0 run during a 15 minute span of the first half keyed the Southwest DeKalb Lady Panthers to a 19-6 road victory over the Chamblee Lady Bulldogs at North DeKalb Stadium on Wednesday.

The game was tied 1-1 just 4:05 into the game as Chamblee’s Kirby Guerrero answered Southwest DeKalb’s Jayla Middlebrooks opening goal with a shot into the corner of the net with 20:55 to play in the first half.

Southwest DeKalb (4-6, 3-3) then went on the 10-0 run to take control of the game. Middlebrooks took a pass from Jasmine McFarlane for her second goal of the game at the 19:28 mark to put the Panthers ahead for good at 2-1.

Tierra Williams grabbed a groundball at midfield and raced through the Chamblee defense for a 3-1 lead just a minute after Middlebrooks gave their team the lead. Williams would score two more goals in the next two minutes weaving through the Bulldogs’ defense two more times for point blank shots.

McFarlane used a good lead pass from Michaela Bennefield to make it 6-1 and Middlebrooks scored back to back goals to make it 8-1 with 7:35 remaining in the first half.

Bennefield used a penalty on the right side to charge for her first goal of the game and then assisted Williams on her fourth goal to make it 10-1.

Carlin Waddell assisted Carson Crochet’s goal with 4:39 left in the first half to trim the lead to 11-2 at the break. 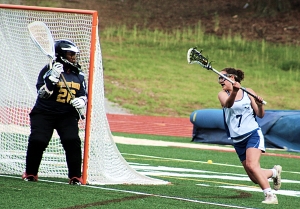 Southwest DeKalb goalie Brittney Buchanan had six saves in the first half several in one-on-one situations where she took the corner away from the Chamblee offensive player.

Viviana Austin-Knab ended that Southwest DeKalb run as she scored for the Bulldogs to make it 15-3 at the 13:48 mark of the second half.

Bennefield scored twice and McFarlane picked up her third score of the game as Southwest DeKalb pulled away to an 18-3 advantage.

Carlin Waddell took a pass in front from Hannah Boyer to pick up the Bulldogs’ fourth goal of the game as the clock ticked towards the six minute mark.

McFarlane used a pass from Williams to get Southwest DeKalb’s final goal of the game with 4:15 to play.

Waddell and Anna Graves would both score in the final three minutes to make the final of 19-6 in favor of the Panthers.

Carlin Waddell had two goals and an assist to lead Chamblee.