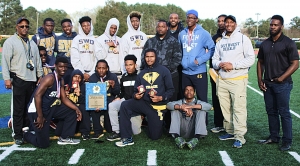 Southwest DeKalb regained the points lead on the next o the last event on Tuesday on the way to the Panthers’ 15th DCSD County Track and Field Championships title 90-69 over Stephenson.

Senior Marcellus Boykin picked up his second individual gold medal of the meet with a win in the 200 meter dash (21.54) to pull the Panthers within 69-68 of Stephenson. Boykin had won the 100 meter dash (10.73) earlier in the day.

Stephenson had no entry in the 300 meter hurdles and the Panthers took advantage as senior Barry Williams (41.37) and junior Jabez Long (41.79) finished third and fourth, respectively, in the even to garner 11 points for the team for a 79-69 heading into the final event (4×400 relay) of the day.

Southwest had the title sewn up with two teams running in the final event and Stephenson having to withdraw due to an injury. The Panthers took second (3:21.71) and sixth (3:28.97) in the event for 11 more points to finish off the victory. 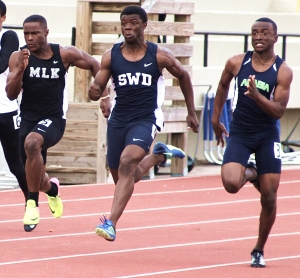 Miller Grove finished the meet strong in fifth place by taking gold in the final two events including sophomore Walik Robinson’s win in the 300 meter hurdles (40.47) and the team of Maurice McMillian, Jalan Williams, Jahdiel Oldfield and Chuck Shawn-Collins capped the day with a win in the 4×400 meter relay (3:20.51).