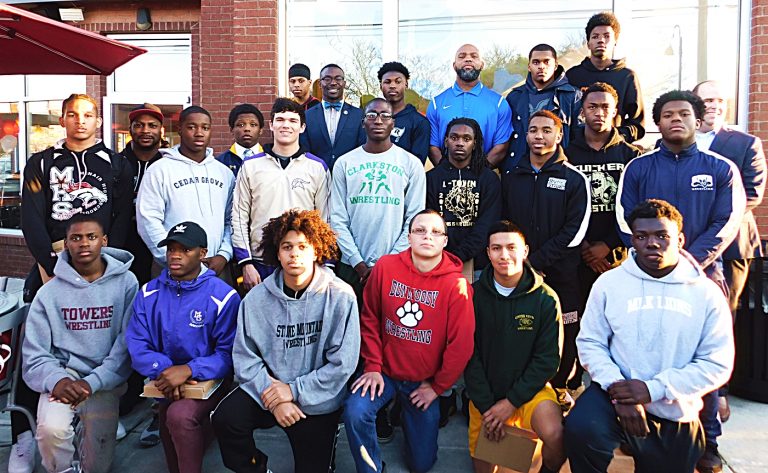 The DeKalb County Wrestling Coaches named the inaugural All-County Team this past week with 44 wrestlers from 22 schools being honored with dinner provided at and by Chick-Fil-A Northlake.

Honorees included 22 First Team and 22 Honorable Mention selections from all 19 DCSD wrestling programs along with Decatur, Marist and St. Pius X. Each school had one first team and one honorable mention named.

Twenty-two of the wrestlers named qualified for their respective state meets and 11 of those placed in the Top 6 including two state champions, three silver medalists, one bronze medalists and five sixth place finishers.

Stephenson first teamer Taquel Young lost just two matches all season including one in the semifinals on the way to the bronze medal in the Class 6A 145 weight class.

The sixth place finishers included Decatur’s Kaden Span (5A, 132), Lakeside’s Cody Domingue (7A 160) and Lithonia’s John Webb (5A 126) who all claimed spots on the First Team.

Honorable Mentions Corey Langner of Marist (4A 170) and Micah Goodwin of Stephenson (6A 145) also picked up sixth place finishes in state competition.

The coaches also nominated McNair’s Ramon Tillery as Coach of the Year. Tillery’s squad won both its Area Dual and Traditional titles while finishing fourth overall in the Class 3A State Tournament. He also had two state champs, one state runner-up (silver medal) and two third place finishers (bronze).

Southwest DeKalb wrestling coach Keith Johnson was responsible for putting the idea together to honor the wrestlers.

See the complete All-County Team selections at the link below: