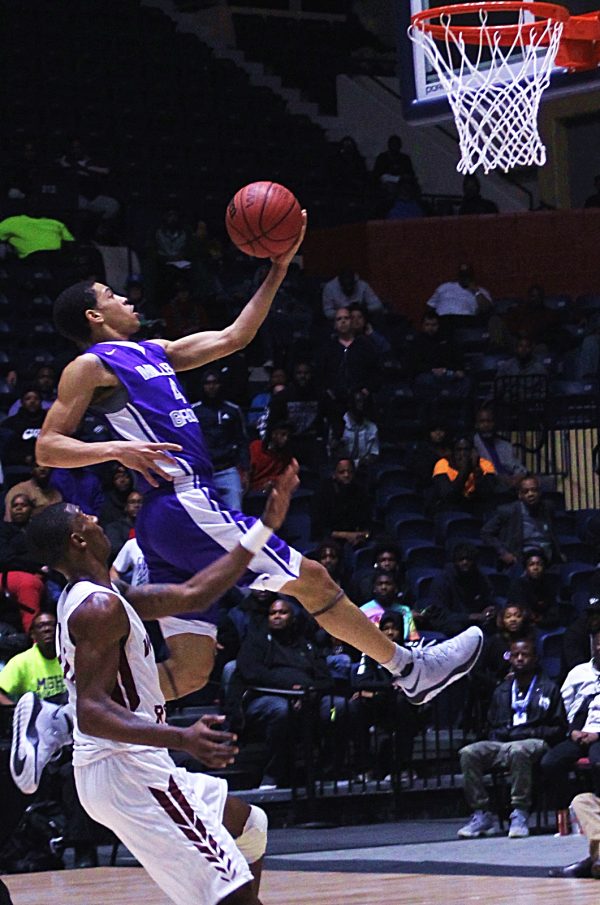 Miller Grove’s Lorenzo Anderson goes in for 2 of his 19 points in the Class 5A boys’ state championship game. (Photo by Mark Brock)

The Miller Grove Wolverines fought back from a 10-point deficit to tie the game twice before Warner Robins’ Jacoelby Owens hit a three-pointer with 1.3 seconds to play for the game winner in the Class 5A boys’ state championship game at the Macon Centreplex on Thursday night.

Miler Grove dug deep and cut the lead to seven (51-44) on Justice King’s shot in the lane just before the end of the third period.

The Wolverines never quit attitude showed as they got a pair of free throws from Lorenzo Anderson and then an old fashioned three-point play with 4:03 to play to cut the margin to 58-55.

Another basket by Phillips made it 60-55 and Terrence Edwards answered at the 3:40 mark with a three from the right wing to again trim the lead, this time to 60-58.

Edwards came back after a pair of misses at the free throw line by Owens to hit a jumper and knot the game at 60-60 with 3:00 left on the clock.

Anderson and Maurice Harvey took advantage in the next minute to hit two free throws apiece with Harvey’s pair tying the game at 64-64 with 51 seconds to play.

The Demons ran the clock down and Owens slipped to his left and fired the game-winner with 1.3 seconds to play. It was the first of 11 attempts behind the three-point arc by Warner Robins to find the net. 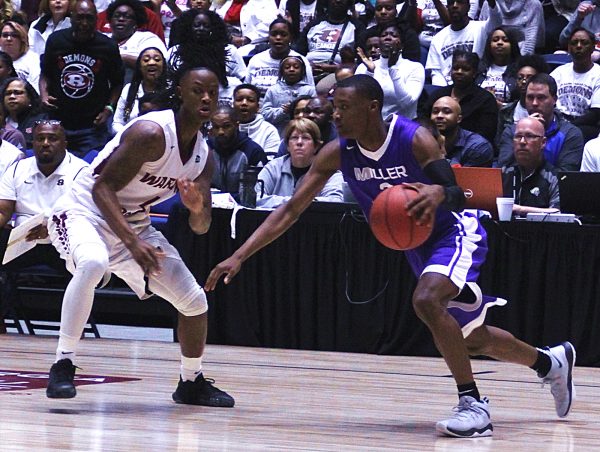 Miller Grove threw a long pass up court, but the touch pass towards Harvey went wide and the game was over.

Anderson hit for eight points in the first quarter to go with a three-pointer each from Maurice Harvey and TJ Stargell for a 15-10 lead heading into the second quarter. The Wolverines were up 7-0 out of the gate.

Nelson Phillips had nine points in the second quarter to rally the Demons. Jaydon Norman’s layup on a backdoor cut tied the game at 29-29 with 12 seconds remaining.

Miller Grove got it up the court quickly with Stargell driving for a layup with four seconds left in the half to send the Wolverines into the break up 31-29.

Lorenzo Anderson finished with 19 points to lead the Wolverines while Harvey added a double-double of 14 points and 10 rebounds along with 6 assists and sophomore Terrance Edwards added 11 points and 6 rebounds.

Owens finished with a game-high 24 to lead Warner Robins with Nelson Phillips adding a double-double of 16 points and 10 rebounds and Jaydon Norman chipping in 13. The Demons were 22-36 from the line while Miller Grove was 16-24.