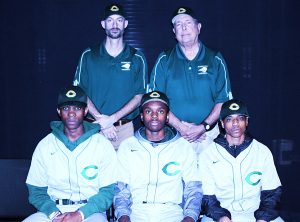 Clarkston baseball staff and top players for 2018 broke a nine-game losing streak to Meadowcreek this past week.

Coach Ron Mills and his Clarkston squad jumped out to a 15-5 lead and held off the Mustangs from there, as junior Kwali Mickle (2-4; 2 RS; 1 RBI) and freshman Nathaniel Williams (1-2; 2 RS) led the offensive charge. Junior Napoleon Waters picked up the pitching decision while striking out two in his one inning of work.

Junior Lynndale Bell also shined at the plate for the Angoras in a 15-8 loss to Stone Mountain Feb. 20, going 3-3 with two RBI and one run scored.

The Vikings also knocked off Chamblee by a 10-2 count Feb. 19, as senior Jack Tansill struck out six and allowed only four hits and one earned run over six innings for the mound decision. Mathis (2-4; 3 RBI; 2 RS) and Ludwick (2-3; 2 RS) paced the offensive charge.

Redan led the way, sweeping both ends of a doubleheader Feb. 24 at Decatur to go 2-0 on the week and move to 5-0 overall for the year. Coach Alexander Wyche’s Raiders easily took care of Grayson (10-0) and Decatur (9-1) by the cumulative margin of 19-1.

Coach Terrence Canty’s Miller Grove Wolverines picked up their first victory of the year, knocking off Stone Mountain by a 10-0 margin Feb. 23 to go 1-0 on the week and move to 1-2 overall.

Coach Sylvester Allen and the Towers Titans opened up the 2018 campaign with an impressive 22-1 triumph over Cross Keys Feb. 23.