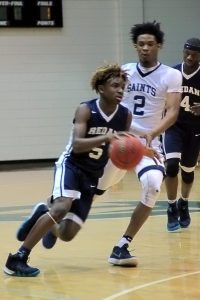 The Class 3A No. 5 ranked Cedar Grove Saints ran out to a 34-10 halftime lead and held off a furious Redan rally for a 65-54 Region 5-3A boys’ semifinal victory.

Kanaris Cummings had three consecutive baskets in an 8-0 run by Cedar Grove (20-6) as the Saints took control early in the first quarter on the way to a 18-6 advantage heading into the second period of play.

Jamari Deans layup with 5:12 left in the first half started a 10-0 run in which five different players scored including Tworn Seals’ rebound and length of the floor drive that helped the Saints to a 34-10 halftime lead.

Marcus Reid’s three-point play in the final 22 seconds of the third quarter made it 47-27 heading into the fourth quarter, but the Raiders fresh off the exciting last second victory over Westminster earlier in the week would not go away easily.

Freshman Javen Flowers-Smith got the Raiders off to a good start in the fourth quarter with a steal and layup which would be the first two of his 13 points in the quarter. Siah Gray’s three-pointer followed and the Raiders began to gain confidence.

Flowers-Smith would take on eight points over the next four minutes as the Raiders began to creep back into the game. Back-to-back baskets by Quantez Glover trimmed the lead to 58-48 with 1:02 remaining. Another three by Gray closed the gap to 10 again, but a free throw by Reid followed by a strong to the hole dunk by Jamari Dean stemmed the tide.

Devon Barnes and Malik Johnson would both hit a pair of free throws to close out the win. Kanaris Cummings finished with 15 points to lead the Saints while Tworn Seals hit for 13 points and grabbed 8 rebounds. Jamari Dean had a quiet 11-point, 11-rebound double in the game.

Javen Smith and Quantez Glover tied for the game high of 16 points to lead the Raiders (13-12).

(B) Pace Academy 54, Towers 52
Towers came with in a few seconds of joining Cedar Grove in the finals, but Pace Academy’s Cole Middleton got inside for a layup with 2.2 seconds to give his team the 54-52 victory.

Towers had tied the game on a pair of free throws by Jakeem Faulkner with 33.7 seconds to play.

Pace moved up court and called a timeout. Coming out of the huddle Pace ran a play to get an open three which hit the rim and bounced down the court allowed Pace to recover and get the ball to Middleton as the final seconds were ticking off the clock.

The Titans (16-9) had the ball with 2.2 seconds, but a long heave went wide left allowing Pace to pull out the win.

Ahmed Grier finished with a game-high 17 points to lead The Titans with 12 points from David Manigo and 10 from Faulkner. 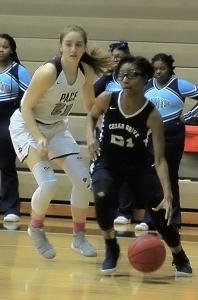 (G) Pace Academy 44, Cedar Grove 31
Pace Academy took advantage of some cold shooting by the Cedar Grove Lady Saints to advance to the Region 5-5A girls’ championship game with a 44-31 victory.

Cedar Grove (11-6) went 2 of 20 shooting layups in the game and Pace took advantage leading 25-17 at the half. Mikaysha Lemon’s layup with 1:19 left in the third quarter pulled Cedar Grove within 31-26 heading into the fourth quarter.

Pace held the Lady Saints to just five points in the fourth quarter to close out the win.

Chamblee (14-10) earned its second consecutive Class 5A girls’ berth with a hard-fought 35-30 win over Columbia (6-19). Southwest DeKalb earned a trip to the state tournament with a 61-11 win over Clarkston (1-21) on Wednesday at Southwest DeKalb.

The Stephenson Lady Jaguars earned an 18th consecutive trip to the state playoffs with a 50-40 win over Mt. Zion-Jonesboro on Wednesday night in Region 4-6A play. Stephenson will take on No. 1 ranked Lovejoy in the semifinals set for Friday at Mundy’s Mill.

Dunwoody (9-18) had its season come to an end with a 56-36 loss to Pope in the Region 7-6A quarterfinals on Wednesday at Northview.

The only DeKalb basketball action on Thursday involves the Druid Hills Red Devils (12-12) facing Salem at 8:30 pm at Luella in the Region 4-4A quarterfinals. The five winners tonight bring the state playoff berths total for DCSD to 18 and a win by Druid Hills would give the district 19.