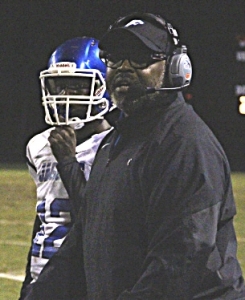 Stephenson Head Coach Ron Gartrell (right) has helped over 200 athletes move on to the next level. Stephenson is second in the state in former players on current college football rosters. (Photo by Mark Brock)

Since 2003 1,514 DeKalb County football players have signed scholarships to move from the high school classroom to a college to continue their educations and football careers.

This is a show of the hard work by DeKalb football coaches, teachers, parents and the athletes themselves as they improve their playing skills and reach their academic goals that allow them to sign the dotted line with the school of their choice.

In this time of big productions by promotional groups and at the schools where the athletes put in their time many forget how much hard work in the classroom and on the practice field is needed to get players to their favorite college team.

Of that 4,000, DeKalb was shown to have 294 former students extending their educations at a higher level. All 19 DCSD football programs had at least one player on a college roster during the fall of 2017. The Top 5 current college football player producing schools in the county were led by Stephenson (52) followed by Tucker (35), Cedar Grove (31), Arabia Mountain (27) and Columbia (20).

The FBS schools represented hail from 36 different states and represent 78 colleges and universities across the United States. Some players have gone as far away as Washington, Oregon and California as well as the Northeast including New York, Pennsylvania, Massachusetts, New Hampshire and Connecticut.

Ten of the DCSD football programs have combined to send 21 players to the armed services academies of Air Force (8), Army (7) and Navy (6). Each of these players had to show a strong academic record along with the character it takes to be accepted to the fast track towards being an officer in one of the branches of the service.

Chamblee tops the list with five former players being accepted to one of these great institutions with three going to the Air Force Academy in Colorado Springs and two joined the Cadets of Army at West Point. Arabia Mountain and Tucker sent three each to the service academies while Cedar Grove, Columbia and Martin Luther King Jr. had two each. Dunwoody, Lakeside, Lithonia and Southwest DeKalb had one representative each accepted to a service academy.

Seven former DeKalb athletes signed with Ivy League schools during this 15-year run. Harvard (4), Dartmouth (1), Princeton (1) and Yale (1) are the schools represented. Tucker sent a pair to Harvard (2011, 2016) with Chamblee and Dunwoody each sending one to play for the Crimson. Avondale (Princeton, 2004), Cedar Grove (Yale, 2013) and Clarkston (Dartmouth, 2006) round out the Ivy Leaguers.

One key component is a free Football Video Recruiting Forum put on by the DCSD Athletics office each December as college coaches make the rounds. The 2017 forum had 71 coaches representing 45 colleges in 16 different states attend. The high school coaches sit with the college coaches to show highlights of the players and discuss their academic eligibility which is key to their recruitment.

Tomorrow (Wednesday) is the traditional National Signing Day for football and 15 DeKalb schools are holding signing day ceremonies. As many as 90 athletes are expected to make their final decisions with three electing to go to one of the service academies. Seven made their decisions back in December in the early signing period.

Tucker (17) and Stephenson (12) lead the way in expected signees.