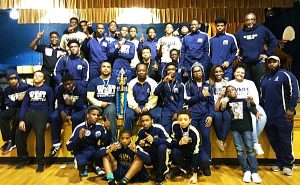 Southwest DeKalb picked up the Area 5-5A Duals championship with a win 48-15 win over runner-up Miller Grove. Both teams advanced to the GHSA State Duals Wrestling Tournament on January 11-13 at the Macon Centreplex.

Miller Grove is making its first appearance at the State Duals Meet.

Southwest DeKalb opened the Class 5A State Duals on Thursday with a 45-27 loss to Clarke Central. The Panthers won their first consolation match 45-36 over Statesboro and advance to take on Veterans at 12:30 on Friday (today).

Miller Grove saw its first state appearance end with consecutive losses falling 77-6 to Buford in the opener and then 74-3 to Ware County in the first round of the consolation bracket.

McNair traveled to Pike County and came home with the Area 2-3A championship title and open Class 3A competition at 5:30 pm today (Friday) against Sonoraville at Macon.

The Stephenson Jaguars qualified for the State Duals by finishing as the Area 4-6A runner-up to Forest Park. The Jaguars lost their opening match at state 55-17 to Pope on Thursday. They are taking on Dalton today in the consolation round.