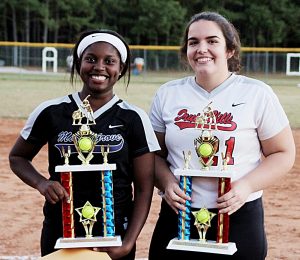 The Red All-Stars used a 10-run third inning to rally from a 13-5 deficit on the way to a 19-15 defeat of the Blue All-Stars in the 13th Annual DCSD Senior Softball All-Star Classic on Monday at Stephenson High School.

Trailing 13-5 heading to the top of the fourth inning, the Red All-Stars put up a 10 spot in their half of the inning to take the lead for good at 15-13.

A bases loaded walk and a two-run double by Lewis-Anderson in the fifth inning expanding the lead to 18-13 in favor of the Red squad with 2 ½ innings left in the game.

The Blue All-Stars tried to answer in the bottom of the fourth loading the bases with one out, but Red reliever Katie Cassidy (Decatur) got a strikeout and a fly ball to center to end the threat.

McKenzie Hunt (Dunwoody) scored in the fifth on an error and Shai-Anne Stoudemire (Stephenson) crossed the plate on another error in the sixth as the Blue trimmed the lead to 18-15.

McNair’s Skylar Walker-Harris takes off to steal second for the Blue All-Stars. (Photo by Mark Brock)

Lewis Anderson’s RBI single in the top of the seventh made it a 19-15 advantage for the Red heading into the bottom of the last inning.

Lyndsey Puckett (Dunwoody) doubled to lead off the inning for the Blue and with one out an infield single by Alyssa Leveritte (Tucker) put runners at first and third.

Cassidy once again ended the threat with a strikeout and reaching up to snare a line drive for the final out to seal the victory.

The Red team opened the game with a 2-0 lead behind a Brown RBI double only to have the Blue answered with four runs in the bottom of the first inning to go up 4-2 keyed by a two-run single by Audrey Kerba (Druid Hills).

A lead-off triple by Cameron Davis (Lakeside) led to two more runs for the Red in the second with Lewis-Anderson’s RBI double coming with two out in the inning to knot the score at 4-4. 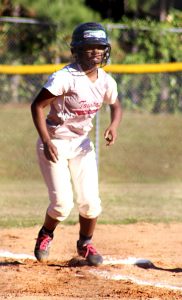 Towers Chyna Jones gets a lead at third for the Red All-Stars. (Photo by Mark Brock)

The bottom of the second featured a nine-run outburst by the Blue hitters that produced a 13-4 lead. A couple of errors by the Red defense, a two-run double by Hunt, two-run single by Dasha King (Lithonia) and a RBI single by Kerba were the key hits in the inning.

Decatur’s Katie Cassidy went four innings for the win on the mound. Red Most Valuable Player Deyonce Lewis-Anderson was 6 for 6 at the plate with 4 doubles, 4 RBI, scored 3 runs and stole 2 bases in the game. The 6-6 performance and 4 doubles were both new All-Star records for the event.

Audrey Kerba (Druid Hills) was named the Blue MVP going 2-3 with three RBI in the game. Dunwoody’s McKenzie Hunt and Lithonia’s Dasha King were both 3-5 with 2 RBI in the game for the Blue while Dunwoody’s Heather Yancey was 2-5 and Shai-Anne Stoudemire of Stephenson was 2-4.