DeKalb’s Region 5-5A Squads Open Road to the Playoffs 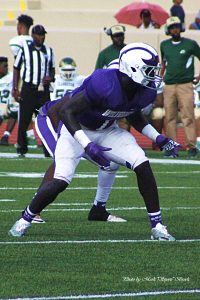 Six DeKalb teams open Region 5-5A action this weekend in three games that begin their trek towards state playoff berths.

A matchup of a pair of 2016 playoff teams is set for an 8:00 pm kickoff at Hallford Stadium as Arabia Mountain takes on Miller Grove in the region opener for the two teams following a bye week.

Arabia Mountain (3-2) enters the game having lost its last two games, but holds a 2-1 edge in the series with Miller Grove (3-2) following a 44-6 victory a year ago.

The Rams are led by quarterback Bryson Williams who has hit of 63 percent (64-101) of his passes for 761 yards and 7 touchdowns. Running back Joshua Campbell picks up the tough yards on the ground with 320 yards (5.3 yards per carry) and 7 touchdowns. Corey Rolle is averaging 17.3 yards a catch with 3 touchdowns to go with 1 touchdown and 228 yards by Silas Butler.

Junior defensive linemen Thomas Rayton and Demetric Barnes had three sacks apiece to lead the Rams on the defensive side of the football.

Miller Grove’s last outing two weeks ago was a thrilling 18-16 win over Lakeside as the Wolverines blocked a late field goal to hold off the Vikings.

Jamaal Roach leads the Wolverines on offense hitting on 67 percent (45-67) of his passes for 482 yards and 7 touchdowns. Richard Young has 218 yards rushing with 3 touchdowns to lead the ground attack. Jalen Stuckey (2 TDs) and Kameron Williams (3 TDs) lead the receiving corps with 13 receptions each.

SW DeKalb vs. Chamblee
The Justin Tomlin led Southwest DeKalb Panthers (3-2) travel to North DeKalb Stadium on Friday night to take on the Chamblee Bulldogs (1-4) in Region 5-5A action.

Tomlin had accounted for 1,451 yards (394 rushing, 1,057 passing) of offense and 13 touchdowns this season as the Panthers strive to make the playoffs for the second consecutive season. Running back Francisco Hunter rushed for almost 200 yards for Southwest in its win over Rockdale County two weeks ago and has 614 yards rushing and 5 touchdowns on the season.

Muhammad Aquil has 340 yards receiving and 3 touchdowns for the Panthers. Senior linebacker Eris Walker has 44 tackles (2 sacks, 6 for loss) to lead the Panthers on defense while junior defensive lineman has 27 tackles (3 sacks, 4 for loss).

Chamblee comes into the game at 1-4 on the season after a season opening win over Druid Hills. Stuart Steele leads the offense with 448 yards passing while receiver Princeton Byrd is averaging 11 yards per catch (10) for 110 yards and 1 touchdown on the season.

Lithonia vs. Columbia
Lithonia (1-4), the Region 5-5A co-champion a year ago, travels to Avondale Stadium on Friday night to face Columbia (3-2) at 7:30 pm in the third all-DeKalb region matchup.

The Bulldogs lone win was a road victory over Luella. Stephen Smith, Ashanti Benloss, Bruce Johnson and Trey Wilkins have totaled 15 tackles each to lead the Lithonia defense.

Tariq Shaw has thrown for 768 yards with receiver Kevah Brantley benefitting with 400 yards receiving and 3 touchdowns. Rayshad Baldwin had 455 yards rushing and a touchdown.

Columbia’s senior defensive duo of Lavar Gardner and Telvin Godfrey lead the way for the Eagles. Gardner had 14 tackles for a loss and Godfrey has 11.

Quarterback Tremaine Calloway and receiver Giovanni Dyer have teamed up for on 16 passes for 401 yards and 3 touchdowns to lead the offense. Khalon Manuel has 338 yards rushing and 5 touchdowns on the ground.