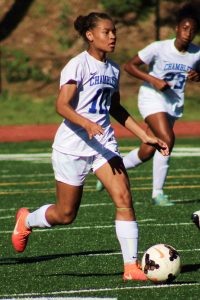 Chamblee’s Tyler Buford (10) gets one last high school game as she participates for Team Pink in the DCSD All-Star Girls’ Soccer game. (Photo by Mark Brock)

The 2017 DCSD All-Star Soccer Classic teams are set for the Thursday, May 18 games at Adams Stadium in the seventh annual event.

This year’s format is slightly different as the coaches went away from the Outside-the-Perimeter vs. Inside-the-Perimeter alignment in hopes of making the games more competitive and exciting for the players and fans.

The girls’ game is scheduled for a 6:00 pm start with Team Green taking on Team Pink.

Gatling has some excellent scorers to work with on offense led by Tucker sophomore striker Anna Lippy who is tied for third in goals in DeKalb with 31. Joining here are Clarkston junior Palma Tamang (29, tie for 5th) and Chamblee senior striker Kamilah Mustafa (28, tied for 7th).

Cross Keys junior forward Andreana Valezquez and Tucker senior striker Tierra Moore both have 19 goals on the season. King’s Nina Shaw has 22 assists, good for third in DeKalb and Mustafa has 15 (tie for 5th).

Chamblee senior goal keeper Lindsay Wilson is 7-3-2 on the season and second in goals allowed average at 0.76/game.

Druid Hills Katy Cochran coaches Team Green and also has some prolific scorers to counter with against Team Pink.

Arabia Mountain senior forward Danielle Dean is second in DeKalb in scoring with 40 goals and has 21 assists. Redan freshman Amadai Veasley is tied for third in goals with 31 while senior teammate Karen Depaz-Veliz has 29 goals and leads DeKalb in assists with 31.

Lakeside’s duo of goalies lead the way in the net as seniors Kenzie Kilgallen (1.99 goals/game) and Miranda McNalley (1.48 goals/game) are fifth and third, respectively, on the DeKalb charts. 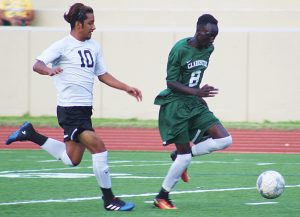 Stone Mountain’s Janvier Malijawa (10) and Clarkston’s Jeremiah Louma (8) get to team up for Team White in the DCSD All-Star Boys’ Soccer Classic. (Photo by Mark Brock)

The boys’ game is set for an 8:0 pm start at Adams Stadium following the girls’ game with Team Blue taking on Team White.

Lakeside’s Alfonso Bautista is set to be in goal. He has played 1,030 minutes in goal this season and has allowed 1.32 goals/game.

Team White is coached by Andrew Goodman of Clarkston along with Thomas Bodnar of Druid Hills. The has representatives from Arabia Mountain, Cedar Grove, Druid Hills, Clarkston, Redan, Southwest DeKalb and Stone Mountain.

Team Blue has the top two goal keepers in DeKalb in Druid Hills senior Josh Lloyd and Clarkston junior Bismark Dansou. Lloyd is atop the goals allowed category at .80 with 1,508 minutes in goal and 99 saves. Dansou is second at 0.90 goals/game in 890 minutes of action.