A 3-1 victory over Starr’s Mill in the Class 5A girls’ state tennis championship match on Saturday at the Clayton County International Park gave the Chamblee Lady Bulldogs their first ever tennis state title.

The victory wrapped up a perfect 25-0 season for Coach Larisa Tulchinsky’s team in her first year at the helm of the program.

Chamblee fell behind 0-1 after the No. 2 doubles team of sophomore Emilya Ershtein and senior Kendalle Smith had to retire due to illness having split the first two sets 1-6, 6-3 giving Starr’s Mill’s Dani Vivas and Olivia Walker the win. The pair finished 7-2 on the season.

Soon after that point loss, the No. 1 doubles team of sophomore Madeline Meer and freshman Madison Trinh evened the match at 1-1. After a hard fought 7-5 victory in the first set against Starr’s Mills’ Caroline Kingsley and Megan Fox, the duo took the second set 6-4 to finish their championship season at 9-1.

Senior Leeza Ershtein entered the court at No. 3 singles at this point and promptly took the first set 6-1 against Starr’s Mills’ Emily Williams. 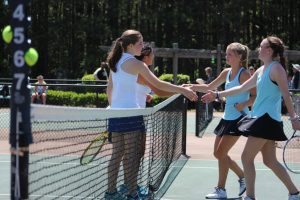 Chamblee’s No. 1 Doubles team of (from left) Madeline Meer and Madison Trinh get congratulated after their big win against Starr’s Mill’s Caroline Kingsley and Megan Fox during the Class 5A state title match. (Courtesy Photo)

The No. 1 singles match went three sets and concluded in a 6-1, 1-6, 6-2 victory for Chamblee’s Olena Bilukha over Starr’s Mills Elena Wernecke to put Chamblee up 2-1 in the match and needing one more victory to clinch the program’s first state title. Bilukha finished the season 19-0 and is 52-0 in her three seasons at Chamblee with only one set loss.

That left No. 2 singles player sophomore Grace Pietkiewicz playing her third set and Ershtein in her second set as both looked to clinch the match.

Pietkiewicz had lost her first set 6-7 in a tiebreaker to Starr’s Mills’ Sydney Soto and bounced back with a 6-4 win in the second set to even the match. She then cruised to a 6-1 victory in the third set to seal the state championship for the Lady Bulldogs. Pietkiewicz finished the season with a stellar 16-1 record.

Ershtein was pulled from the court with the title won, but was leading 3-2 in the second set after having won the first set. Ershtein finished with a sparkling 23-0 record on the season.

The Chamblee title was the first DCSD girls’ state title since Lakeside in 1984 and first tennis state title for DCSD since the Lakeside Vikings won the boy’s Class 5A state title in 2001. The title ended a 33-year drought in girls’ tennis, is the 305th DCSD state title and 11th overall for Chamblee.

Chamblee improved its record to 242-129-1 overall as a program and third best in DeKalb County.