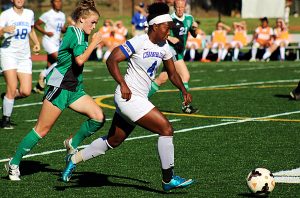 The last two DeKalb County girls’ soccer teams remaining in the state playoffs both dropped their Sweet 16 games on Tuesday to fall from the playoffs.

The Chamblee Lady Bulldogs lost 6-0 to No. 4 ranked McIntosh in a game that was much closer than the score indicates as the Lady Chiefs led just 1-0 heading into the final 27 minutes of play at Adams Stadium.

McIntosh (12-6-2) scored off a rebound on a missed shot with 33:54 remaining in the first half and took the 1-0 lead into the half despite Chamblee’s chances.

The Lady Bulldogs (13-4-2) got pressure on the McIntosh defense and with 16:51 left in the first half Kamilah Mustafa got past the defenders to line up a shot from the left side which sailed high over the cross bar.

Fifty second later Chamblee’s Abby Washburn got an opening, but once again the shot went high to leave McIntosh with the 1-0 lead.

Mustafah got off a shot from the right side with 34:32 to play in the game only to have the McIntosh goalie make the save at the goal post to keep the score at 1-0.

McIntosh extended the lead to 2-0 as a player out front in a crowd took a pass off her chest and into the goal for the score.

Chamblee tried to put the pressure on once again only to have McIntosh get past the defense a shot went off the goalie and rolled slowly into the goal to make it 3-0 with 15:20 to play.

McIntosh would exploit the Chamblee press with two more goals and add a garbage goal with 54 seconds to play to make the final of 6-0.

Class 6A
The Tucker Lady Tigers struggled from the beginning against Sequoyah in a 10-0 Class 6A second round loss at Hallford Stadium on Tuesday.

Sequoyah (12-6-2) wasted little time scoring and took a 9-0 advantage into the half before finishing the game off with a goal in the first three minutes of the second half for the final of 10-0.

There are four DeKalb boys’ teams in action tonight including a doubleheader at Hallford Stadium with Clarkston entertaining Starr’s Mill at 6:00 pm in Class 5A play followed by Tucker hosting Allatoona in Class 6A.

Druid Hills plays the host role at Adams Stadium in a 7:30 pm game against Northwest Whitfield.

Cross Keys goes on the road to No. 1 ranked McIntosh for a 7:30 pm game in Class 5A boys’ action.