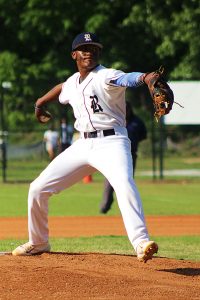 Redan’s Latrell Wyatt threw four innings of no-hit baseball to lead the Raiders to a 13-0 win over Stone Mountain on senior night at Redan. (Photo by Mark Brock)

Latrell Wyatt and James Parris teamed up for a no-hitter to lead the No. 1 ranked Redan Raiders to a 13-0 Region 5-3A victory over the Stone Mountain Pirates on Friday night.

After giving up a leadoff walk in the top of the second inning Wyatt settled down and returned nine consecutive Pirates as the Raider offense began to heat up.

A RBI bunt single by Malcolm Burns in the bottom of the second got the Wyatt the only run he would need to make it 1-0. James Parris and Wyatt went on to draw bases-loaded walks in the inning to make it a 4-0 game after two complete.

Wyatt struck out the side for the second time in the game in the top of the fourth before the Raiders would string together nines and score nine runs in the bottom of the fourth to make it a 13-0 advantage.

VJ Glover led off the fourth for Redan (21-8-1) and moved to second on an error before Fureed Norton singled into right to score Glover from third.

Parris followed with an RBI double, Wyatt a RBI single and Orlando Adams a RBI double as the lead grew to 8-0 with no one out in the inning.

Darius Pope added the second RBI double of the game and Burns picked up two more RBIs with a single to center to make it 11-0. RBI singles by Joshua Richards and Glover made it 13-0 before the Pirates could get out of the inning.

Parris went to the mound in the top of fifth and gave up a walk and hit a batter to put two runners on base with nobody out. Parris found the strike zone and set the next three batters down to end the game.

Wyatt got the pitching victory going four innings with six strikeouts and one walk while not allowing a hit.

Burns finished the game 2-3 with three RBIs to lead Redan at the play while VJ Glover was 2-2 with an RBI and a double.

The Raiders are the No. 1 seed out Region 5-3A and will host Region 7-3A No. 4 seed Fannin County next Friday at Redan.