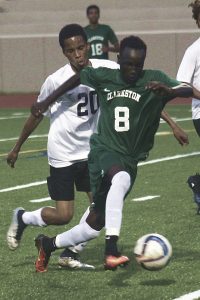 Clarkston’s Jeremiah Luoma (8) gets past Stone Mountain defender D’Andre Martin (20) on the way to scoring. (Photo by Mark Brock)

The No. 2 ranked Clarkston Angoras shutout the Stone Mountain Pirates 6-0 in a matchup of playoff bound DeKalb County soccer teams on Thursday at Hallford Stadium.

Clarkston, the Region 5-5A champ, and Stone Mountain the No. 3 seed out of the tough Region 5-3A are both headed to their respective playoffs next week.

The two teams played scoreless until with 10:51 gone in the first half Jeremiah Luoma found Angora teammate Bosco Hakuzimana out in front of the Stone Mountain goal for a 1-0 advantage.

Less than two minutes later Luoma got loose on a breakaway down the middle of the field to score for a 2-0 Clarkston lead with 27:16 to play in the first half.

The lead remained 2-0 until the 12:57 mark of the first half when Clarkston’s Mohamed Tambadu slipped past a defender to put the ball into the corner of the net to make it 3-0.

Stone Mountain worked hard to keep the game at 3-0 for over nine minutes until Bismark Donsou got a deflection off a corner kick and put it through the crowd and into the goal to make 4-0 heading into halftime.

Tambadu made it 5-0 about 13 minutes into the second half as he got past the defenders and broke for the goal to put the shot in for the score.

The score remained 5-0 until the 8:21 mark of the second half when Michael Debelie scored to make the final of 6-0.

The Angoras (15-1-1) host Cass at Hallford on Friday night in the first round of the Class 5A state playoffs. The Pirates (8-4-1) travel to East Hall on Wednesday for their opener in the Class 3A state playoffs.

Clarkston’s Palma Tamang (9) runs away from Stone Mountain defender Rainai Beaugris (12) on the way to one of her four goals in the game. (Photo by Mark Brock)

Clarkston 10, Stone Mountain 0
Palm Tamang scored four goals to lead the Clarkston Lady Angoras to a 10-0 victory over the Stone Mountain Lady Pirates in the opener at Hallford on Thursday.

Tamang would give her team all the goals they needed as she scored three consecutive goals to put Clarkston up 3-0 with 18:24 to play in the first half.

Clarkston would score three goals in the final 10 minutes of the first half to take a 6-0 lead at the break. Sunday Luoma was the first to score in that final 10 minutes followed by Azza Adams and Samaya Muse to complete the blitz.

Tamang took just three minutes to strike in the second half making it 7-0 with 37:00 to play. Two minutes later Kefai Debebe pushed the lead to 8-0 as she sailed a penalty kick into the net for another score.

Debebe got her second goal of the game with 22:13 to play to end the game at 10-0 in favor of Clarkston.