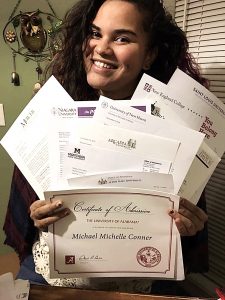 Tucker senior soccer player Michelle Conner chose Seton Hall over 10 other colleges and universities she was admitted. She plans on studying biology on the path to Veterinarian School. (Courtesy Photo)

Tucker Lady Tiger soccer player Michelle Conner is the epitome of what student athlete stands for as a top student in the classroom, athlete on the field and community service person.

As the school year nears to a close for the senior, she has compiled a 4.0 GPA as an honor student in the top 10 percent of her class. Her academic performance is one reason why she has been accepted into 11 colleges and universities across the nation.

The senior defender is wrapping up her high school career as part of the Region 4-6A champion girls’ soccer team and has a pair of DeKalb County Soccer Coaches All-Star selections (2015-16) headed into the 2017 teams’ selection as well as serving as a Team Captain two of her four years on the team.

She has a total of eight goals and five assists from her position on defense and one of her two goals this season came from midfield.

The Lady Tigers, coached by Sarita Duvall and Daymeon Corrie, teamed up with their male counterparts at Tucker to sweep the Region 4-6A titles, a feat believed to be a first at the school in soccer.

Conner also joined in on other extracurricular activities at Tucker High including Beta Club, Literary Magazine, Science Honor Society, Rise Up Mentor, and Art Honor Society and volunteered in numerous service projects through the school.

She also gives back to the community and heritage with her volunteering outside of school. Conner has traveled to Serpent River First Nation in Ontario, Canada to deliver soccer donations and aid in conducting a soccer camp.

Volunteering at FurKids Animal Shelter and the Parkwood Farms Equestrian Therapy Center is part of her giving back to her community.

Another highlight of her academic career was being chosen as a participant in the Emory University Discover Medicine Program at Grady Hospital in Atlanta.

Conner begins her journey to become a veterinarian as she pursues a degree in biology while attending Seton Hall University this fall.

She is the daughter of Michael and Angelique Conner.