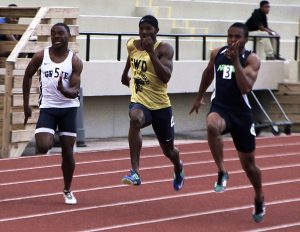 Cedar Grove’s Israel Spivery (far left) swept the 100 and 200 meter dashes at the Region 5-3A Track Championships on Monday. (Photo by Mark Brock)

The defending Class 3A state champions Cedar Grove Saints rallied from a six-point, first day deficit to overtake Westminster 181-169 for the Region 5-3A track title on Monday at Westminster.

Westminster held a 70-64 lead after the field events held on Saturday despite three gold medals by the Saints.

Cedar Grove’s Marcus Allen, Kortney Cox, Israel Spivey and Barry Williams teamed up to capture the 4×100 relay (41.92) gold medal and coupled with a fourth place finish by the second Cedar Grove entry in the event pulled ahead of Westminster.

The Saints capped the championship off with a 1-2 sweep of the 4×400 meter relay. Terrence Lewis, Deanthony Moore, Israel Spivey and Matthew Young took the gold with a time of 3:20.43.

McNair’s DeMarshae Travis brought home the gold in the long jump with a leap of 21-06.00.

Antania Swain won the discus (96-09.50) and Mynaisha Mitchell took the high jump (5-02.00) as Cedar Grove picked up a pair of gold medals during the field events day.