Tucker Wins Matchup of Region 4-6A Unbeatens against Stephenson 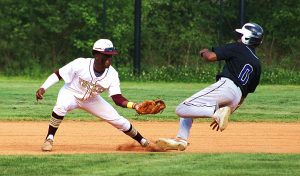 Tucker shortstop Trevon Flowers (left) puts a tag on Stephenson baserunner Chretein Adams on an attempted steal. It was the first of three base runners gunned down by Tucker catcher Christian Webb in the game. (Photo by Mark Brock)

Tucker ran its consecutive win streak to 18 with a 3-2 victory over the Stephenson Jaguars in a battle of teams without a loss in Region 4-6A at Tucker on Friday afternoon.

Tucker (21-6) entered the matchup 14-0 in region play while Stephenson (15-9) was 12-0 having won 13 of its last 12 games heading into the head-to-head meeting. The anticipated meeting lived up to the hype with pitching, defense and timely hitting.

The game was tied 2-2 as the Tigers came to bat in the bottom of the fifth, but Tucker’s Miles Grayson stroked a long ball over the left center field fence to put the Tigers back on top at 3-2.

Willis would go the distance adding his 10th and 11th strikeout in the sixth inning and then working out of runner on third with one out jam with a groundout and fly ball to left to seal the 3-2 victory. The Tigers improved to 15-0 in the region while Stephenson fell to 12-1 as the teams prepare for the second game of the regional series on Monday.

The first 3 ½ innings was pitching duel between Tucker’s Emory Willis and Stephenson’s Gavon Wray as the five baserunners that reached never made it past first.

Wray picked off a pair of Tiger runners to eliminate two of the three he allowed on base (two hit by a pitch and 1 single). Willis meanwhile allowed a game opening walk and a single to lead off the third while striking out six of the nine batters he faced.

Tiger catcher Christian Webb gunned down both runners allowed on by Willis trying to steal second as the two teams headed to the bottom of the fourth tied at 0-0.

Willis helped his own cause with two out in the bottom of the fourth as he singled to left to score Makai Holloway who had walked to start the inning and moved to third with a pair of steals. The Tigers were not done as Willis’ pinch runner stole second and scored on a single off first base by Louis Davenport that bounced into right field to make it 2-0 heading into the fifth.

Stephenson’s Anthony Johnson answered Tucker’s scores by hitting the first pitch over the center field fence to cut the lead to 2-1. 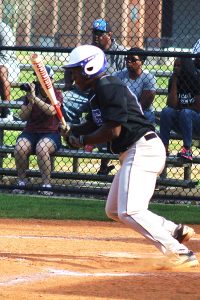 Stephenson’s Dylan Kinder heads to first on his base hit to center to lead off the third inning. (Photo by Mark Brock)

Miles Bowens followed Johnson’s homer by getting hit by a pitch and scored with one out as a pair of errors in the field by the Tigers allowed him to go from first to home to tie the game.

Willis worked out a one-out, runner on third jam with a strikeout and a fly out to keep the game tied and set up Grayson’s game-tying homer in the bottom half of the inning.

Tucker threatened in the bottom of the sixth as a walk to Davenport and a single by Webb put runners at the corners with two out. Wray came through with a big strikeout to end the threat and keep the Jaguars in the game down 3-2.

Johnson and Bowens both singled, but Webb threw out Johnson trying to steal and then Willis with Bowens on third following a pair of wild pitches got the ground out and fly out to end the game.

Tucker (22-6, 15-0) had not multiple hit batters, but Willis, Davenport and Grayson all had one hit and one RBI in the game. Willis got the complete game victory with 11 strikeouts, 1 walk and 5 hits. Webb finished the game with three throws to gun down Jaguar runners attempting to steal second.

Stephenson hosts Tucker on Monday at 5:30 pm needing a win and wins in its series with Mundy’s Mill to tie the Tigers atop the Region 4-6A standings.