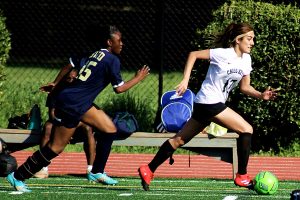 The Cross Keys Lady Indians rolled to a 10-0 Region 5-5A girls’ soccer win over the Southwest DeKalb Lady Panthers at Adams Stadium on Thursday to clinch home field advantage in the first round of the Class 5A state soccer playoffs.

Junior midfielder Adriana Velazquez, who had four goals in the first half, opened the scoring with a goal into the left corner just 2:24 into the game for the early 1-0 lead for the Lady Indians.

Five minutes later Velazquez found the right corner for a 2-0 lead with 32:30 left in the first half. The advantage increased to 3-0 with 23:13 to play in the first half as Velazquez again struck for a goal to give her the hat trick.

Southwest goalie Amber Thomas made a pair of good saves, one at the 18:31 mark and another at 17:52, as she took on the attacker to block the shots.

Velazquez wrapped up her day with 17:05 to play as she took a pass in front of the goal for an easy shot into the net to make it 4-0.

Stephanie Ramirez got into the act on a pass from Joanna Hernandez with 14:28 to play in the half to make it 5-0 and then finished a breakaway with 11:24 remaining for a 6-0 Cross Keys lead.

The Lady Indians got a corner kick with 8:49 to play and Nathalie Baculima headed it into the goal to make it 7-0 with 8:49 remaining.

The score remained 7-0 until Martha Gaitan’s breakaway goal with 1:05 left in the first half to send Cross Keys into the half up 8-0.

It took less than two minutes for Cross Keys to end the game by the mercy rule in the second half on breakaways by Esmeralda Valdes and Ramirez to make the final of 10-0.

The Class 5A state playoffs begin on April 27 for the girls and April 28 for the boys.

The Class 6A state playoffs begin on April 27 for the girls and April 28 for the boys.

Region 7-7A
The Lakeside Lady Vikings (7-5-2, 3-1) have two games remaining in region play against Berkmar and Brookwood with a playoff berth virtually secured.

The Class 7A state playoffs begin on April 27 for the girls and April 28 for the boys.

Region 4-4A
Druid Hills (10-5-0, 5-0) has locked up the No. 1 seed on the boys’ side with one game remaining against Eastside. A loss would put them in a tie with Woodward Academy, but the Red Devils won the head-to-head on Thursday for the tiebreaker.

The Class 4A state playoffs begin on April 25 for the girls and April 26 for the boys.

Region 5-3A
Stone Mountain and Redan are qualified for the Class 3A state playoffs as the regular season winds down next week.

The Pirates (8-3-1, 4-2) can secure the No. 3 seed with a win over Lovett while Redan’s Lady Raiders are set to enter the playoffs as the No. 4 seed. Both teams go on the road in the opening round.

The Class 3A state playoffs begin on April 25 for the girls and April 26 for the boys.