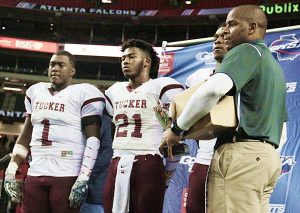 A game that will peak the imagination of many Georgia high school football fans will be the August 11 meeting between Class 6A state runner-up Tucker and Class 5A state runner-up Buford at 7:30 pm at Adams Stadium.

Class 5A Sweet 16 entry Southwest DeKalb opens the preseason schedule traveling to Salem on August 4 for a 7:00 pm game. Defending Class 3A state champion Cedar Grove takes on Class 7A playoff entry Newton County on the road at 7:00 pm on August 5.

The slate for Friday, August 11 is full with eight games scheduled against outside DeKalb County opponents.

Two of the games involve schools located in DeKalb County, but not a part of the DCSD. Druid Hills travels to neighbor Decatur for a 7:30 pm game while Lakeside faces Marist at 7:30 pm in the second consecutive preseason matchup between the two schools.

Atlanta’s KIPP Academy plays host to Towers at 7:00 pm and McNair travels to Fellowship Christian for a 7:30 kickoff. Osborne entertains Clarkston in another game slated for a 7:30 pm start while Dunwoody travels to Apalachee with a scheduled start of 7:30 pm as well.

Chamblee and Washington are set for August 11 as well, but a site and time have yet to be announced.

Columbia, Cross Keys, Lithonia and Stone Mountain have not scheduled a scrimmage at this time.