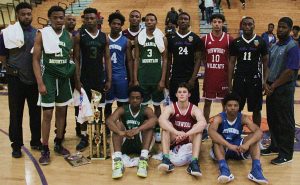 The West All-Stars held off several furious rallies by the East to hold on for an exciting 100-95 track meet on the basketball court at Miller Grove on Thursday in the DCSD Senior Boys’ All-Star Basketball Game.

Trailing 56-41 at the half, the East under the direction of Lithonia’s Wallace Corker that had not led in the game since a 5-4 lead with 5:45 got hot from behind the three-point line in a game that had 31 three-pointers made.

Robert Hatchett of Lithonia got the East started with a three pointer and Columbia’s Kenton Eskridge made a steal for a layup on the inbounds and followed with the second of seven three-pointers by the East in the quarter.

Eskridge sandwiched a three from Malik Smith of Towers with two more from behind the arc as the gap closed to eight (66-58) with 4:05 left in the quarter. 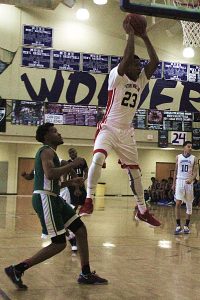 After Clarkston’s AJ McNeil hit a three for the West, Chamblee’s Odell Ferrell and Southwest DeKalb’s Darius Hogan both scored on back-to-back trips down the floor to pull the East within 68-62 with 2:30 remaining.

Three-pointers on consecutive trips by Hogan and Lakeside’s Cameron Starkes as the clock ticked below two minutes tied the game at 68.

The West then finished the quarter with a 6-0 run on baskets by Arabia Mountain’s Jamaal Middleton, Miller Grove’s George Wilson and Tucker’s Joshua Clammon to take a 74-68 lead into the final quarter.

A 6-0 run by the East answered the West as Southwest DeKalb’s Jalen Lee got a tip-in and Stone Mountain’s Azarius Cole drove inside for two baskets, the second tying the game at 74-74 with 6:38 to play.

Arabia Mountain’s Darius Giles hit his third three of the night at the 6:24 mark to give the East the lead for good at 77-74.

McNeil, the game’s MVP, contributed seven points on a pair of three-pointers and a free throw as the West went on a 15-4 run to go up 89-78 on a basket by Tucker’s Colin Joseph with 3:37 remaining.

The East would not go quietly as Eskridge would hit four three pointers in the final 3:15 to keep the pressure on the West.

Joseph and McNeil would counter with one three-pointer each in the span as Eskridge’s sharpshooting cut the lead to five twice.

The West would finish with 14 three-pointers in the game with McNeil leading the way with 23 points followed by Larkins with 14, Giles 11, Miller Grove’s Joshua Jackmon 10 and Stephenson’s Aloy Ufere with 10.

Eskridge hit for 8 of the East’s 17 three-pointers on the way to a game-high 26 points while Cole added 16 points and Starkes 11.

The halftime show was the boys’ three-point contest with McNeil putting on a show. He scored a perfect 40 on his first round dunk to reach the finals against Towers Malik Smith.

McNeil who went second was prepared for a big wow as he jumped a pair of teammates standing together in front of the basket for the slam that brought the fans to their feet. There was no doubt who the winner was.

He was asked for an encore and with Smith holding the basketball on his neck, McNeil leaped while grabbing the ball as he passed over Smith’s head and dunked to bring the crowd yelling to their feet as the two teams got ready for the second half.