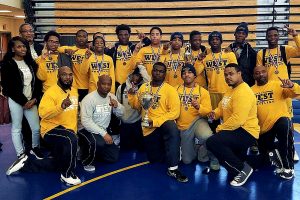 The Southwest DeKalb Panthers made a clean sweep of the Area 5-5A wrestling titles by following up on its Duals title with the Traditional title.

Six gold medals were collected by the Panthers on the way to 211.5 points to out-pace Arabia Mountain’s 124 for the championship.

Arabia Mountain picked up gold medals by Khyree Alexander (132) and Josh Logan (195) on the way to the second place finish.

Area 2-3A
DeKalb collected a second place trophy in Area 2-3A as McNair came up just short in a 185-197 loss to Crisp County.

The Mustangs got a pair of gold medal performances in the tournament by Torrence Dumas (145) and Jamie Jinks (160).

Collin Torres (220) and Gordon Lewis (285) climbed to the top of the heap in their divisions to bring home gold medals.

Constantine Gavalas grabbed the gold in the 195 weight class to lead the Wildcats performance along with Jacob Starks at 113.

Demarco Mosley went undefeated in the 195 weight class to capture the gold medal for Druid Hills.