Bulldogs Hold on in 53-52 Thriller over Rival Dunwoody 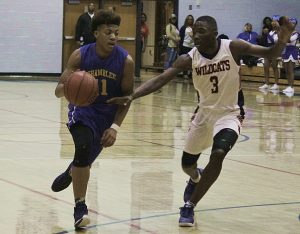 The Chamblee Bulldogs took the lead early in the fourth quarter and held off a valiant comeback effort by the Dunwoody Wildcats to win an exciting 53-52 victory to sweep the season series with their rivals.

Sidi Diallo kept giving the Wildcats (7-11) a four-point cushion as he drove to the basket twice and Jeff Powell’s rebound and basket with 2:40 left in the quarter put Dunwoody up 34-30.

Chamblee’s Glenn Robinson was fouled on a made layup, missed the free throw but sped down the lane for the rebound and put back to knot the game at 34-34 with 2:26 remaining in the period.

Will Bentson’s reverse layup on a pass from Ty Lilly gave Dunwoody the lead back at 36-32 with 1:48 left in the quarter.

The two teams would not score for the next minute of play until Chamblee’s Zack Mackson drilled a three-pointer with 49 seconds in the quarter to give Chamblee its first lead of the game at 37-36.

Dunwoody answered with 23 seconds left in the quarter as Jared Whitehurst hit a jumper in the lane to regain the lead for the Wildcats at 38-37 heading into the fourth quarter.

Smith opened the fourth period with a layup to give the Bulldogs the lead for good at 39-38 with 7:52 to play. Robinson, Smith and Dazz Riggins each hit baskets as the lead went to 45-40 with 5:36 to play.

Whitehurst had a basket and free throw to trim the lead to 45-43 with 4:31 remaining. Chamblee answered as Robinson, Smith and Andrew Littleton put together a 6-0 run for a 51-43 advantage with 2:23 to play.

The Wildcats then began to claw their way back into the game as the Bulldogs made four turnovers. Whitehurst took one of the turnovers coast-to-coast and Turner Nims added another short jumper as the score got tighter.

Diallo’s steal and layup with 59 seconds to play pulled the Wildcats within 51-50.

Chamblee ran the clock down with Smith scoring his eighth point of the quarter for a 53-50 advantage with 24 seconds to play.

Dunwoody had the ball with 8.1 seconds to play and called timeout to set up the possible tying basket. Whitehurst’s try bounced off the rim and Lilly rebounded and made the put back as time ran out giving Chamblee the one-point victory. 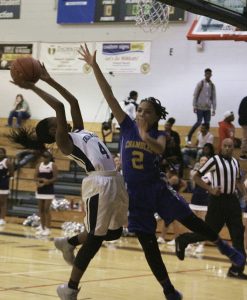 Dunwoody’s Ariel Lawrence (4) goes against Chamblee’s Teri Syphoe (2) for two of the 15 points in Dunwoody’s 44-36 win. (Photo by Mark Brock)

(G) Dunwoody 44, Chamblee 36
Dunwoody hit 7 of 9 free throws in the fourth quarter to hold off the Chamblee Lady Bulldogs 44-36 to earn a split in their season series.

A 6-2 run to end the first half gave Dunwoody a 28-22 lead heading into the second half behind as Jackie Beausolei’s basket from about 15 feet went through the net at the buzzer.

Dunwoody (8-10) continued the momentum opening the third quarter on a steal and layup by Ariel Lawrence and a three-pointer by Kayla Blaise to extend the lead to 11 (33-22) with 4:08 left in the period.

Teri Syphoe started a 10-2 run for Chamblee (8-7) with a free throw and came back down the court to hit a three-pointer. Trinity Edwards had a drive to the basket and then added a pair of pull up jumpers from 10 feet along the right baseline to close the gap to 35-32 heading into the final period of play.

The two teams would only score from the free throw line in the first 6:30 of the fourth quarter with Omari Foote of Dunwoody hitting three of four to make it 38-34 with 3:00 to play.

Blaise would hit four consecutive free throws in the final minute of play to push the lead back out to 42-36 with 28.7 seconds remaining. Kameron Halliday picked up a garbage basket just before the buzzer to make the final of 44-36.

Trinity Edwards finished with a game-high 16 to lead Chamblee and Teri Syphoe added 14 points and 8 rebounds. Serena Robinson had a game-high 16 rebounds for Chamblee.