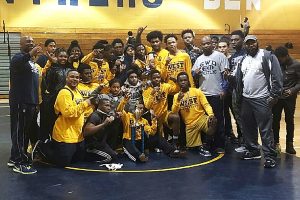 The Southwest DeKalb Panthers wrestled to eight Top 3 finishes, including four gold medals, to jump past 2016 champion McNair and runner-up Decatur to capture the 2017 DeKalb County (DCSD) Junior Varsity Wrestling Championship on their home mats just before the holiday break.

Gold medal performances by J. Williams (106), Coby Ficklin (120), Homer Brown (160) and Eris Walker (285) gave the Panthers four wrestlers with their hands raised at the end of their championship matches. All four went 3-0 in the tournament.

Decatur came up short of any gold medals, but had two silver and four bronze on the day. Cullen Carter (126) and Isa Hardey (195) were class runners-up for the Bulldogs. 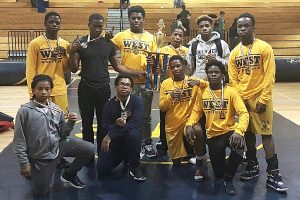 SW DeKalb medalists show off their hardware after the 2017 DCSD JV Wrestling Championships.

Stephenson picked up a pair of gold medals to grab fourth place in the team standings. Micah Godwin went 4-0 in the 182 weight class and Jamal McDonald was 3-0 to win the 220 class.

Darren Graham (113) won the gold to lead Lithonia to its fifth place finish in the team standings.