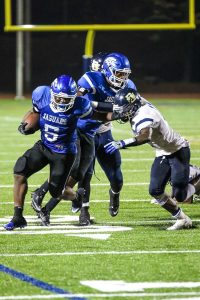 Stephenson’s Jaylen Marson-Knight (5) ran for a pair of touchdowns to lead the Jaguars to a 21-0 win over Southwest DeKalb. (Photo courtesy of Hudgins Photography)

The Stephenson Jaguars got their first win of the season with a 21-0 shutout of rivals Southwest DeKalb Panthers on Friday night at Hallford Stadium.

Jaylen Marson-Knight was the big contributor on offense for the Jaguars as he rushed for 187 yards and two touchdowns on 19 carries to lead Stephenson in the win.
His first touchdown came on the opening drive as the Jaguars struck in three plays, including Marson-Knight’s 19-yard scoring run that would be all Stephenson needed in the shutout victory.
Junior linebacker Mike Makins preserved the 7-0 lead with a fumble recovery in the end zone as the Panthers tried to answer the Jaguar score.
Stephenson (1-2) extended its lead to 14-0 in the third quarter on a D’Vonn Gibbons to Marquise Whitmire 12-yard touchdown pass.
Marson-Knight scored the game-clincher with under 8 minutes to play in the game on a one-yard dive into the end zone for the final of 21-0.
The victory extended the Jaguars win streak against the Panthers (2-2) to six games and the series lead to 8-5. Southwest DeKalb last won in 2004 in a thrilling 14-13 victory. 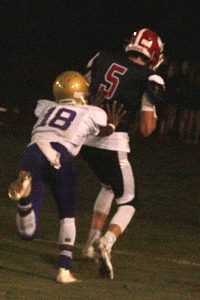 Dunwoody’s Tuner Nims (5) shown hauling in a touchdown vs. Lakeside had the game winning reception in 14-10 win over North Atlanta. (Photo by Mark Brock)

Dunwoody 14, North Atlanta 10
The Dunwoody Wildcats rallied for a pair of touchdowns in the fourth quarter to pick up a 14-10 come-from-behind victory over North Atlanta at Grady Stadium on Friday night.

North Atlanta (1-2) jumped out to a 10-0 lead which it held as the game entered the fourth quarter.
Dunwoody (2-1) cut the lead to 10-7 on Rony Martinez’s six-yard rushing touchdown on the first of two big scoring drives by the Wildcats.
Quarterback Nick Pastrone led the Wildcats to the winning score by connecting with Turner Nims on a 45-yard touchdown pass play to give Dunwoody the 14-10 lead.
North Atlanta tried to rally with a late drive down the field. As the Warriors faced fourth down in Wildcat territory, a pass to the end zone was knocked down by Dunwoody’s Will Benston to preserve the come-back win for the Wildcats.
Arabia Mountain 24, Dacula 21
Cameron Ward’s 25-yard field goal with 1:30 to play propelled the Arabia Mountain Rams to a first-ever fourth consecutive victory to open the season 24-21 over Dacula. 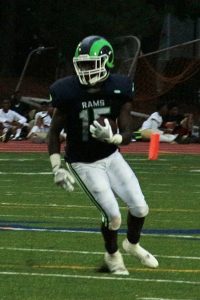 The Rams had trailed for most of the game before taking a 21-14 lead on Terray Bryant’s 54-yard fumble return for a touchdown in the fourth quarter.