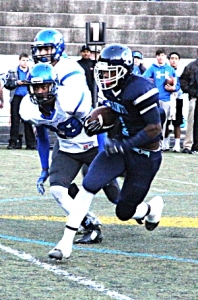 Cedar Grove’s Tre’ Shaw (1) was one of three Cedar Grove Saints named to the Class 3A Preseason All-State Team. (Photo by Mark Brock)

The 25 all-state players include three from Cedar Grove and one from Towers, all four which are committed to FBS universities.

Offensive line cohorts and University of Georgia commits Netori Johnson (6-5, 320) and Justin Shaffer (6-5, 330) return for their senior seasons after leading the Saints to the Class AAA state semifinals where they lost to eventual state champion Westminster. Johnson had 20 tackles, 8 for a loss, and Shaffer added 20 tackles and 7 for a loss on defense for the Saints.

A third Saint to be named is senior defensive back Tre’ Shaw (6-1, 180), a North Carolina commitment, who rushed for 258 yards and three touchdowns in Cedar Grove’s 47-0 shutout of Pierce County in the first round of the Class 3A state playoffs last season. Shaw finished the season with 67 tackles on defense including 1 sack, 1 tackle for a loss, 1 interception, 1 fumble caused and 1 fumble recovery. He had 767 yards rushing and 10 touchdowns on offense.

Towers was represented on the team by defensive lineman and South Carolina commit Devonte Wyatt (6-4, 275). Wyatt had 52 total tackles in 2015 including 7 sacks and 10 tackles for a loss.

Cedar Grove and Towers compete in Region 5-AAA which includes fellow DCSD teams McNair, Redan and Stone Mountain along with Westminster, Lovett, Pace Academy, the 2015 Class 2A state champ. The region had 10 of the 25 preseason all-state selections.

Westminster and Pace each had three players named to the squad.