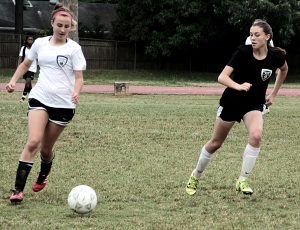 The ITP girls’ continued their mastery of the OTP improving their series lead to 5-0-1 to remain undefeated in the six years of the contest. The only tie was a 2-2 decision in the 2013 Classic.

Druid Hills senior striker Alison Rugel got the ITP squad on the board as she hit a shot from the left side just over the goalies reach and into the right corner of the net with 25:19 left in the first half.

The score remained 1-0 until the 7:57 mark when Rugel struck again, this time on a penalty kick off the foot of Towers forward Mia Carradine to make it 2-0.

The OTP answered just over a minute later (6:46 left in the half) as DeKalb County leading scorer Jasmine Mathis of Martin Luther King put a rebound off a goalie save into the net to cut the lead to 2-1 at the half.

The two teams battled with the lead holding at 2-1 for the ITP early in the second half.

The OTP got an opportunity with 18:50 to play, but a shot on goal was just wide right to keep the score at 2-1.

Chamblee junior striker Kamilah Mustafa widened the lead to 3-1 with 12:50 to play and Druid Hills’ junior midfielder Indigo Childs got free down the middle for a game-clinching fourth goal with 11:30 remaining.

Rugel was named the ITP Most Valuable Player with her two goals and excellent leadership on the field matching her brother, Julian, who won the award in the boys’ game in 2014.

Mathis earned the OTP MVP award by her play, including the team’s only goal. 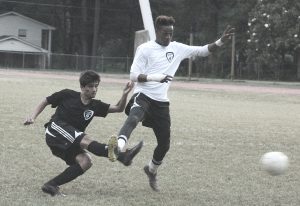 ITP 5, OTP 0
The OTP won the past two games in the series in penalty kicks by sending the game into overtime, but the ITP made sure there would be no overtime this year with a 5-0 shutout.

The victory gave the ITP a 3-2-1 lead in the series which had been very highly contested each of the previous five years.

Lakeside senior Sean McDaniel got the ITP off to the early 1-0 lead as he put a penalty kick just under the bar just 6:23 into the game.

Four minutes later Druid Hills junior Luke Narker lofted a pass to Clarkston junior Lionel Touroudo who went into the air and nudged the ball into the goal to make it 2-0 in favor of the ITP.

The clock was ticking down under 19 minutes remaining in the half when Lakeside’s Max Wieder found an opener Oyenga Abdufatai of Cedar Grove who scored to give the ITP a 3-0 lead.

Trailing 3-0, OTP’s Okevious Hawkins of Miller Grove got a free kick following an offsides call on the ITP. Hawkins lofted the ball to the goal and in for an apparent goal to cut the lead to 3-1. The goal was disallowed as a direct kick which was not touched by another player.

The ITP took the 3-0 lead into the half.

The OTP came out with pressure to open the second half and an opportunity to trim the lead to 3-1 bounced off the right goal post and back into play.

The two teams would go the next 17 minutes without many opportunities until McDaniel found Wieder on a give and go to make it 4-0 with 21:13 to play in the game.

A breakaway by Towers’ Kanghi Bavon with 14:50 was the icing for the ITP to make the final of 5-0.

McDaniel who had a goal and an assist in the game as well as some nice passes for scoring opportunities by his teammates was named the ITP MVP.

Okevious Hawkins who had a goal disallowed and played most of the game with an injured hand/wrist was named the OTP MVP for his defensive play and courage.

The win sent Lakeside coach Ben Smith out on a winning note in his final game as the head coach. The Vikings finished 20-1-0 this season under Smith losing a tough 1-0 Class 6A quarterfinal game to Milton after running off 20 consecutive wins.