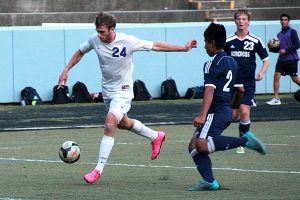 Lakeside’s Max Wieder (left), the 2015 ITP MVP, returns to lead the ITP as the team tries to break the two-year win streak by the OTP.

Avondale Stadium plays host to the 2016 DCSD All-Star Soccer Classics on Thursday with the girls starting the festivities at 6:00 pm and the boys following at 8:00 pm.

Lakeside’s Tim Newmyer and Druid Hills’ Katy Cochran team up to coach another strong contingent for the ITP All-Starts.

The squad features four players with over 20 goals on the season led by Towers junior Mia Carradine who is second in the county with 44 goals on the year. Druid Hills senior Allison Rugel (24 goals, 14 assists) brings some talented feet as well. Lakeside sophomore Tyler Smith (24) and Chamblee junior Kamilah Mustafa (24) round out the strong offensive team.

Martin Luther King’s Vincent Gatling and Tucker’s Daymeon Corrie are looking to put the OTP in the win column with some talented players of their own to put on the field.

Sophomore Jasmine Mathis of M.L. King comes into the game as the county’s leading scorer with 48 goals this season and is joined by another sophomore Georgi-Ann Sinclair of Southwest DeKalb who has 25 goals on the season.

Southwest DeKalb junior Courtney Baker put together a strong season with 20 goals and 14 assists (tied for most in the county) while freshman Autumn Carter added 15 goals on the year.

Tucker freshman goalie Erin Obarowski finished the season 8-4-0 with a 1.32 goals allowed average (third in the county) in 12 games in goal.

Boys All-Stars
The boys’ series is all knotted at 2-2-1 following the OTP’s exciting back-to-back penalty kick victories the past two seasons.

The ITP coaching staff of Ben Smith (Lakeside), Andrew Goodman (Clarkston) and Thomas Broadnar (Druid Hills) have put together a squad with a good mixture of veterans and underclassmen in an effort to break the OTP’s streak.

Lakeside senior Max Wieder, the ITP MVP last season (1 goal, 1 assist), returns after putting together 18 goals and 8 assists in the Vikings run to the Class 6A State quarterfinals that including 20 consecutive victories. Cross Keys senior Gilberto Ramos is another of the veteran players who finished the season with 14 goals and 16 assist (2nd in county).

Another veteran for the ITP is Druid Hills junior Luke Narker (16 goals, 6 assists).

Mark Johnson (Tucker), Michael Gaskin (Stephenson) and David Hill (Lithonia) have more of a defense based squad they as they look to slow down the ITP to keep the 2-0 streak alive.