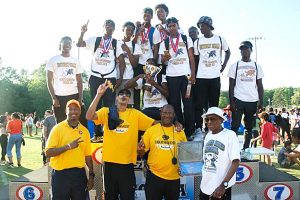 Defending a state title is never easy, but the Southwest DeKalb Panthers made it look easy with four gold medal performances on the way to a 58-44 win over Cedar Shoals at Memorial Stadium in Jefferson last weekend.

Trailing in the standings after the field events, the Panthers opened the track finals with a bang as the 4×100 meter relay team of Terry Conwell, Jaylan Muhammad, Justin Tomlin and Terryon Conwell ran a 41.06 to best last season’s 41.26 gold medal performance.

The two Conwell brothers helped the Panthers seal the state title with a 1-2 finish in the 200 meter dash with Terryon winning in 21.32 and Terry following in second at 21.47 to score 18 points to put the title out of reach of their competitors.

Druid Hills was in a tie for 42nd behind Deishawn Worrell’s sixth place finish in the 200 meter dash.

Dunwoody picked up one point via Sam Haas’ eight place finish in the pole vault (12-00.00).

Class 6A
The Lakeside Vikings made a strong run at the Class 6A Boys’ State Championships coming up just five points short to finish third behind Newton County (48-43).

Campbell climbed into a tie with the Vikings at third with a strong finish in the 4×400 meter relay and South Gwinnett held on for second with 45 points.

Senior distance runner Andrew Kent was a big factor in the run by the Vikings as he captured gold medals in both the 1600 meter run (4:13.07) by knocking 11 seconds off his qualifying time and the 3200 meter run (9:08.45). Senior teammate Davis Stockwell finished fifth in both events.

The 4×400 meter relay team’s fifth place finish (3:19.20) in the final even of the meet clinched the third place tie for the Vikings.