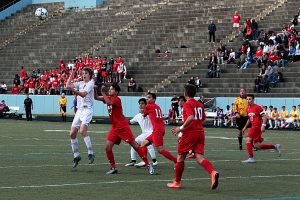 Lakeside’s Will Mallory (far left) goes up for a header off a corner kick in the Vikings’ 1-0 loss to Milton in the Class 6A state soccer quarterfinals. (Photo by Mark Brock)

Soccer season came to an end for DeKalb County with some tough losses in the state playoff quarterfinals last weekend.

The No. 2 ranked Lakeside Vikings (20-1-0) who had tied the 2008 state championship team for the most wins in a season at 20 with their second round win over Norcross dropped a tough 1-0 decision to No. 4 ranked Milton (15-3-1) on Friday at Hallford Stadium.

Shots by Raul Tinoco (33:13) and Saul Tinoco (25:51) in the first half went just wide left as the Vikings missed a couple of opportunities early against a tough Milton defense and goal tender.

Milton answered at the 23:53 mark of the first half of a big defensive play by Lakeside goalie Alfonso Bautista. Bautista blocked a one-on-one with the Milton striker, but the deflection went to an unguarded Milton player who put the ball in the net for what would be the game winner.

The game went to the second half at 1-0 in favor of the Eagles.

Milton opened by pressuring the Vikings’ defense in the second half with Bautista getting a big save at the corner just five minutes into the second half to keep Lakeside within one goal.

Bautista forced a bad angle by a Milton offensive player with 18:36 to play that made his shot carom off the goal post and back into the field of play.

The Vikings began to find some openings in the Milton defense late in the game, but big saves by the Eagle’s tender at the 3:15 and 48 second marks of the second half preserved the win.

Lakeside finished the season as the Region 2-6A champs and won its county leading 575th game as program with the victory over Norcross against 148 losses and 46 ties.

Class 3A Boys
The Cross Keys Indians goal of reaching the Class 4A state finals for the second consecutive season came up two wins short in a road game at Cairo on Friday night.

Class 6A Girls
The No. 10 ranked Lakeside Lady Vikings were the last remaining DeKalb County soccer team as they headed into their Class 6A quarterfinal match against No. 1 ranked Lassiter on Saturday.

Lassiter took advantage of the home field on the way to a 5-1 victory to knock Lakeside from the state playoffs.