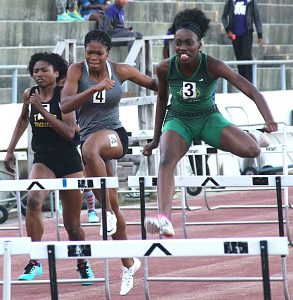 Cedar Grove was one of two teams to finish in the Top 5 of their classification scoring 32.50 points in Class 3A competition trailing 2016 state champ Maynard Jackson (62.20).

The Lady Saints were led by Amani Taylor who captured gold in the discus with a throw of 123 feet, 9 inches to score 10 of the 14 points she put on the board for Cedar Grove. Taylor was fifth in the shot put (35-06.00).

Class 6A
The Tucker Lady Tigers also picked up a Top 5 finish with 38 points good for fifth overall in the Class 6A state meet.

McEachern won the Class 6A title with 69 points.

Class 4A
The Chamblee Lady Bulldogs finished in a tie for sixth with Hampton with 28.50 points in the Class 4A state meet. Monroe of Albany was first with 81 points to take the title.

Arabia Mountain finished just out of the Top 10 in 11th place with 22 points led by Destinee Rocker’s gold medal performance in the 100 meter hurdles with a time of 14.11.

Jazmine Johnson added to the Lady Rams total with six points via a silver medal performance in the shot put.

Class 5A
The Stephenson Lady Jaguars were the fourth DCSD girls’ track team to put together a Top 10 finish with 21 points in the Class 5A State meet good for 10th behind state champ North Springs’ 50 points.

The Lady Jaguars got 20 of their points from field event specialist Timberly Molden who collected a pair of gold medals last week. Molden won the discus with a throw of 132 feet, 11 inches and the shot put with a toss of 43 feet, 8.5 inches to propel Stephenson into the Top 10.

Dunwoody and Druid Hills were in a three-way tie for 25th with Allatoona with eight points. Ansley Heavern scored seven of the eight points for Dunwoody behind a bronze medal finish in the 1600 meter run (5:10.47).

Martin Luther King finished in a five-way tie for 28th with six points with all of them coming in the 300 meter hurdles from Taleebah Martin in fifth (45.50) and Courtney Franklin in seventh (45.89).