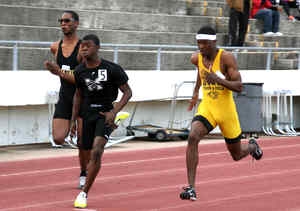 Southwest DeKalb’s Terryon Conwell (yellow) pulls even with McNair’s Marcellus Boykins (5) on the way to the 100M Dash gold at the 2015 DCSD Championships. (Photo by Mark Brock)

Track fans get a good look at some of the top track and field competitors in the state beginning Saturday at 10 am as Godfrey Stadium plays host to the 2016 DeKalb County School District Track and Field Championships.

The field events open the competition at 10 am while the track preliminaries begin at 3:00 pm. The track finals are set for a 5:30 pm start on Monday (March 28) at Godfrey Stadium.

The 2016 boys’ champion Southwest DeKalb and girls’ champion Chamblee return some of their top performers as they prepare to defend their titles in the 59th running of the Championships.

The Panthers are coming off their 9th state track title in 2015 and 14th DCSD championship and return juniors Terry and Terryon Conwell along with sophomore Justin Tomlin who made up three of the four members of the 4×100 meter relay team that won county and state a year ago.

Cedar Grove came in fifth at the 2015 championships before going on to win the Class AAA boys’ state championship.

Senior sprinter Andre Burrell, an Arkansas State track signee, and senior Jessie Reverio made up half of the Class AAA state champion 4×100 and 4×400 relay teams a year ago. Burrell was a runner-up to Terry Conwell in the 400 meter dash at the County Championships last year, just .44 behind and will challenge him for the gold once again. 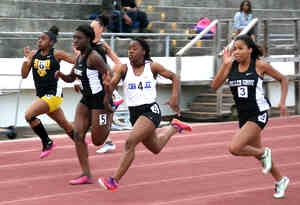 The Chamblee Lady Bulldogs made history a year ago winning their first ever county title 102-96.5 in a thrilling finish that went down the final event.

Senior Venida Fagan returns to defend her titles in the 100 and 200 meter dashes along with Elena Brown-Soler (high jump) and Rachel Edler (long jump).

Redan returns double-gold medal winner Shequilla McClain who took gold in the 100 and 300 meter hurdle events a year ago and Zindzy Jones who along with McClain made up half the Class 4A 4×400 meter relay state champions.