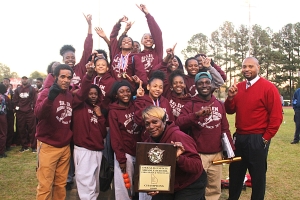 Two relay teams in the final event proved to be a big key as the Salem Lady Lions rallied past Chamblee and Champion to win the DeKalb County School District Middle School Girls’ Track Championships on Monday at Godfrey Stadium.

The “A” 4×400 meter relay team for Salem consisting of eighth graders Lauren Euler, Evanna Greene, and Naya Bostic and seventh grader Kamaya Smith qualified second best in Saturday’s preliminaries (4:26.72), but turned it on in the final race of the day that would boost the team to the title 67 to 65 over both Chamblee and Champion.

Chamblee had built a commanding lead on the first day with 45 points and was holding on at the end without a team in the final race of the day at 65 points with Champion closing to within 8 and Salem trailing by11.

Salem knocked almost 11 seconds off its prelim time to record a 4:15.22 to take the gold medal in the final race of the day to pick up 10 of the 11 needed points. 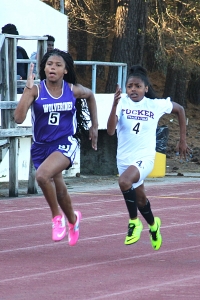 The “B” team including eighth graders Jalen Parker, Lieryc Reed, Charleiqua Lackley and seventh grader Jasmine Paige finished just where they qualified in sixth with a time of 4:35.21 (two seconds faster than the qualifying time) to pick up the title deciding three points.

Salem (Greene, Reed, Alliyah Bradley and Brianna Russell) had won the 800 meter sprint medley (1:56.43) and compiled a total of 33 points, almost half their final total, in the four relay events. Salem had started the day in fourth place, 34 points behind Chamblee.

The title was a first for Salem in any DeKalb County middle school sport dating back to 2004.

Champion started the finals trailing leader Chamblee by 41 points, but opened the final day with big record setting victory in the 1600 sprint medley relay. The team of Sharon Ino-dike, Geryeon Peay, Shani Simon and KeAndrea Middlebrooks had set a new meet record in the prelims of the event with a time of 4:29.93 to break Chamblee’s record set last year at 4:34.61.

The group did one better in the finals by running a 4:29.06 to break their own record in taking the gold and starting a rally towards front runner Chamblee.

Middlebrooks would take gold in the 400 meter dash with a time of 1:02.20 and Simon grabbed first in the 800 meter run with a time of 2:32.07 as the Lady Chargers edged closer to the top of the standings.

Defending champion Tucker finished fifth with 43 points despite an MVP winning performance by eight grader Jessica Shelley. Shelley swept the 100 (12.61) and 200 (25.81) meter dashes and anchored the 4×100 meter relay team that took gold with a time of 51.91.

Shelley broke the 200 meter record of Chamblee’s Angelic Henderson (25.61 in 2010) by running a 25.47 in the preliminaries on Saturday. Teammates JaKayla Swift, Joanna Nguyen and Breanna Mosley set Shelley up for a big final leg in the 4×100 relay as Shelley took the baton and blew past the rest of the field to clinch the gold.