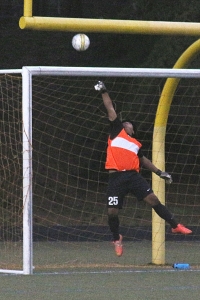 The Cross Keys Indians lived almost a year thinking about what might have been following a 1-0 loss to the St. Pius Golden Lions in last year’s Class 4A Boys’ Soccer State Championship match in Macon.

A final minute shot by Cross Keys hit the cross bar at the Mercer University soccer field and St. Pius held on for the 1-0 win to claim the state title.

The opportunity to end some of those thoughts came on Tuesday night at James R. Hallford Stadium in Clarkston as St. Pius travelled across DeKalb County to take on their Region 6-4A foe Cross Keys in a showdown of Top 5 ranked boys’ soccer teams.

Much like the state title game last May the two were battling 0-0 throughout most of the first half.  Both goalies deflected shots over the goal in the early going to keep the score knotted at 0-0.

A point blank shot by Cross Keys with 23:10 left in the first half went high and a second attempt with 10:15 remaining went wide right as the Indians began to apply the pressure to the St. Pius defense.

The Indians finally got on the board with 6:46 to play in the half as Gilberto Ramos lofted a corner kick high in front of the St. Pius goal. Teammate Joseph Avellaneda timed his jump correctly and headed the ball behind the outstretched hand of the Golden Lion keeper for the 1-0 lead.

The Golden Lions came out of the half pushing the ball up the field to pressure the Indians defense, but could not get any real shots on goal.

Cross Keys found itself in another corner kick situation with 33:26 to play in the game. Ramos again took the shot from the corner, but a header attempt went left and short of the goal. Fortunately for the Indians Roberto Martinez was waiting and headed a shot between a pair of St. Pius defenders to make it 2-0.

The Indian defense and keeper Eduardo Cabrera continued to turn away the Golden Lion pressure that had ramped up due to the two goal deficit.

The Indians took advantage of the Golden Lions moves up the field with 4:36 to play as a deflected pass was sent up the field. Eduardo Dimas tracked down the ball running past the St. Pius defense and getting it into the goal to seal the game at 3-0.

The win puts the Indians in the position to take the No. 1 seed from Region 6-4A heading into the state playoffs and another possible state title battle with St. Pius in May. 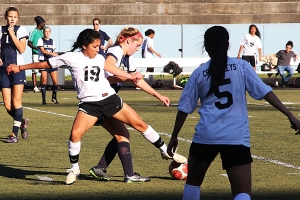 Girls
St. Pius 11, Cross Keys 0
The five-time defending state champions St. Pius Lady Golden Lions (7-2-1) took a while to get warmed up before closing out an 11-0 victory over the Cross Keys Lady Indians (2-5).

Cross Keys entered the game without their starting goalie, but battled defensively to keep St. Pius scoreless with three big saves in the early going.

St. Pius opened the flood gates when a long shot into the corner went over the Indians’ goalie’s head for the first score with 30:54 left in the first half.

St. Pius scored five more times in the next 10 minutes to make it 6-0 on the way to the win.