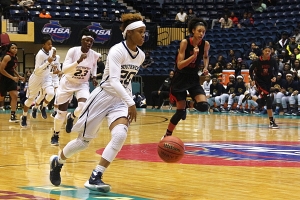 Southwest DeKalb forced a turnover with 1.5 seconds to play to hold on for a 49-48 Class 5A girls’ state championship victory over Winder-Barrow on Friday in Macon.

The win gave the Lady Panthers (27-6) and Coach Kathy Walton a fifth state title in nine seasons and upped DeKalb consecutive seasons with a basketball state championship to 13.

A lane violation on a made free throw with 5.9 seconds to play negated the point for Southwest DeKalb and Winder-Barrow got the ball with the length of the court to go.

The Lady Bulldogs inbounded the basketball and got it up the right side when the Southwest defense cut off the path and forced an errant pass that went out of bounds with 1.5 seconds to play. 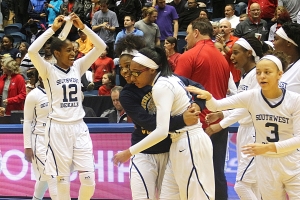 Chantz Cherry threw a long pass over a defender to a streaking Jada Walton and she dribbled out the clock to preserve the thrilling one-point victory and return the state championship trophy to the Lady Panthers for the second time in four seasons.

Southwest DeKalb took a 36-35 lead into the fourth quarter as freshman Raven Thurman hit a pair of baskets to put the Lady Panthers up 36-32 with 48 seconds left in the period.

Winder-Barrow’s Latrice Perkins scored just before the end of the quarter to pull the Lady Bulldogs (26-7) within one heading into the final quarter of play.

Olivia Nelson-Ododa put an offensive rebound back in the basket to give Winder-Barrow a short-lived 39-37 lead.

Thurman struck again for Southwest with an offensive put back and layup on a nice pass from Michaela Bennefield to put the Lady Panthers back up 41-39 with 3:52 to play in the game.

The two teams were tied at the half as a late Southwest DeKalb foul sent Latrice Perkins to the line with 1/10th of a second left in the second quarter. Perkins hit 1 of 2 to knot the game at 25-25 headed into the break.

The Lady Panthers shot just 27.5% in the first half and had to rally late in the second quarter as Winder Barrow’s Tiera Mayweather hit a pair of threes that would lead to a 21-15 lead for the Lady Bulldogs with 3:06 left in the half. 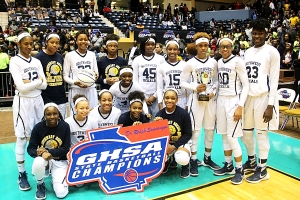 Thurman got an offensive put back and a nice short jumper on an assist from Lanee Edwards to start an 8-0 run. Daisa Alexander took advantage of a pair of steals to score two easy baskets to give the Lady Panthers a 22-21 lead with 1:40 remaining in the half.

Alexander then hit a three to make it a 25-23 game and would finish with a game-high 19 points to lead the Lady Panthers in the win and Thurman finished with 13 points.

Southwest shot just 26.4% from the field on the night, but with 27 turnovers by Winder-Barrow was able to get enough shots off to counter act the poor shooting.

Nelson-Ododa hit for 13 points and grabbed 19 rebounds to lead Winder-Barrow in the loss.