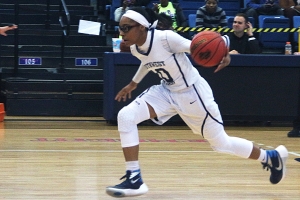 Southwest DeKalb’s Chantz Cherry will direct the Lady Panthers’ offense against Winder-Barrow on Saturday in the Class 5A state title game. (Photo by Mark Brock)

Three DeKalb County School District basketball teams are vying for state championships this weekend in Macon and can extend the District’s string of consecutive seasons with a state basketball title to 13.

The No. 1 ranked Southwest DeKalb Lady Panthers step into the spotlight first as they face the unranked Winder-Barrow Lady Bulldogs, the only No. 4 seed to reach the championship round, in the Class 5A girls’ championship set for 7:00 pm at the Centreplex.

Southwest DeKalb (26-6) is making its seventh appearance in the state championship game in the past nine seasons, having won four titles in 2008-2010 and 2013 under the direction of Coach Kathy Walton.

The team presented Walton with her 300th career victory this season and has Walton sitting at 323-99 in 14 seasons at Southwest DeKalb. Walton can become the eighth Georgia girls’ basketball coach to win five state titles with the win.

Junior teammate Jada Walton (922 career points) is providing ample support to Alexander averaging 10.5 points per game and junior Chantz Cherry is running the offense averaging 3.5 assists per game, 71.4% from the free throw line and being a force on defense tied with Alexander at 4.5 steals per game.

Southwest DeKalb is averaging 61 points per game in the playoffs and allowing just 40.3 per contest while Winder-Barrow is scoring at 54.5 clip and allowing 43.3 per game. It is the first ever playoff meeting between the two teams. 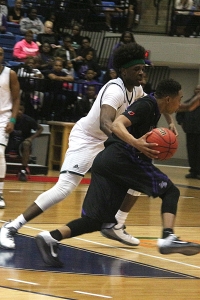 Senior Aidan Saunders (with ball) driving against McIntosh is one of several seniors working to regain the state championship. (Photo by Mark Brock)

Coach Sharman White’s Wolverines are looking to reclaim the state title after having their six-year run as champion broken last season with a quarterfinal loss to Warner Robins and are making their seventh state championship appearance in the past eight seasons.

Miller Grove is 29-2 with the only two losses coming to nationally ranked Chaminade (Missouri) and Lone Peak (Utah) in games played out of state.

Augustin who averaged 8.1 assists during the season has hit a 7.5 assists per game clip during the playoffs and Gilbert has upped his season average of 5.8 assists to 6.3 during the playoffs. The pair are also leading on defense with Gilbert added 5.5 steals and Augustin 3.0 steals over the four-game run. Richardson has helped on the defensive end supplying 3.8 blocks per game.

Allatoona is 31-0 on the season and led by sophomore Trey Doomes (14.3 points/5.5 rebounds) and senior Ehpraim Tshimanga (12.4 points/6.2 rebounds/5.5 assists). The Buccaneers are averaging 54.3 points per game in the playoffs and allowing just 45 per game.

Allatoona defeated No. 3/4 Cedar Shoals 48-46 in the semifinals. 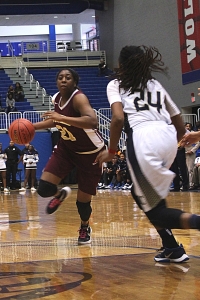 Class 6A Girls
A battle of two of the top 5 ranked teams in Class 6A takes the court as the Tucker Lady Tigers (No. 1 AJC/No. 5 Score Atlanta) match up against the two-time defending champions McEachern Lady Indians (No. 3 AJC/No. 4 Score Atlanta) at 7:00 pm on Saturday at the Centreplex.
Coach Robin Potter’s Lady Tigers (27-4) are in the state title game for the second time in three years (won the 2014 Class 5A title) behind a balanced offense that has four players averaging between 12 and 9 points on the season.

The group is led by senior Kierra Johnson-Graham (12.3) followed by junior Bria Bass (11.5), senior Najila Shamsid-Deen (9.6) and senior Jayla Morrow (9.1) who had 20 points in a 74-60 win over No. 10 Woodstock in the quarterfinals at West Georgia last week. All four were in double figures led by Bass with 19 in the 79-66 win over No. 8 Douglas County which only lost two games on the season, both to Tucker.

Johnson-Graham (8.6 rebounds) and Mariya Trimble (5.9) spent a lot of time pulling down rebounds for Tucker in the playoff run. Johnson-Graham also had 3.0 steals per game in the f our-game run to go with 2.2 by Shamsid-Deen and 2.0 by Trimble.

Morrow was also finding open teammates on offense averaging 2.6 assists in the playoffs along with 2.5 by Shamsid-Deen and 2.0 by Johnson-Graham who also averaged 1.3 blocks per game.

The team also put Potter into the 200 career victory club this season upping her 13 season total at Tucker to 226-143.

The defending champions Lady Indians (24-7) are riding an 18-game winning streak with the last loss coming at the hands of Plano West (Texas) on December 30th. The only in-state loss for McEachern came in the season opener against Class 5A No. 1 ranked Southwest DeKalb.